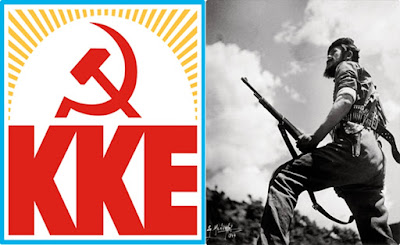 The Second World War was the result of great contradictions and impasses that shaked the global capitalist system, its need to overcome financial crises in a violent way, by the re-sharing of markets and spheres of influence. At the same time, the aim of both the two imperialist blocs, both of the Axis (Germany- Italy- Japan) and the one of the US- Great Britain and their allies was the destruction of the Soviet Union, the first workers-socialist state in history which inspired the people in all countries and had a decisive contribution in the overthrow of Nazism. This is what those who unhistorically equate nazism with communism are trying to conceal.

The element of "national unity" which is emphasized by the bourgeois political forces on the occasion the 28th October anniversary, aims to deceive the people in order to entrap them in the "national goals" of the bourgeoisie and the capital. History teaches that neither in 1940 nor in the subsequent years there was "national unity" and it couldn't exist. On one hand it was the majority of the people who fought through the lines of EAM-ELAS, it was the KKE which was the main inspiring force, guide and donor of EAM's Resistance, the Party that sacrificed its best members to this struggle, thus paying a heavy blood tax. On the other hand, it was the bourgeois class and its political forces, some of which collaborated openly with the occupators, some fled abroad and a few others organized, under the guidance of the British, resistance groups focusing on the post-war developments, the stabilization of the bourgeois power and the undermining of the KKE and EAM.

Today, the "national aim" refers to the "restoration of normality", that is to say the recovery of the capitalist economy, something which demands and prosupposes the crushing of workers-people's rights on the altar of "investments attraction", of Greek economy's "extroversion". Greece's involvement in all dangerous imperialist plans of US, NATO and the EU, in the name of the country's "geostrategic upgrade", is suggested as a "guarantee of peace and stability in the region". The government of New Democracy (ND) decisively serves these plans- following the path of the previous government - with the despicable "defense" agreement it signed with the U.S, which strengthens and expands military bases in Greece, thus transforming the country into a vast US-NATO base.

This tigheting with the U.S and NATO, not only does not guarantee stability at all, but implicates the people of the region into a new bloodshed towards the creation of new flows of uprooted refugees, as the very recent experience with the "green light" given for the new Turkish invasion in Syria has proved.

Building on historical experience, the people need to gain confidence and strength in their struggle for the right and the victory, to trust the KKE. So that the people will not find themselves "under the flag" of their exploiters, but in order to create their own path for their own power, to become the masters of the wealth they produce, outside of the EU and NATO "wolve-pack alliances", in society without poverty, unemployment, crises and wars: socialism-communism.