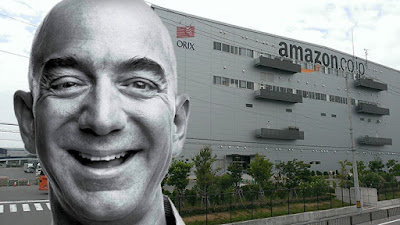 Located in residential areas in Kanagawa’s Odawara City, roughly a 1.5-hour train trip from central Tokyo, is a huge five-story building measuring 200,000 square meters in area. It is the Amazon Odawara fulfillment center (FC), Amazon’s largest warehousing and shipping facility in Japan. Starting its operation in September 2013, the facility stocks a wide variety of goods, such as books, CDs, home appliances, and kitchen tools, which are shipped to Amazon customers.Okawa Akira recently quit his job at the Odawara FC. This man in his 40s was assigned to a job carrying ordered items from shelves to the shipment spot in the facility. He wheeled around a cart laden with cartons full of shipments.“My co-workers one after another resigned after they suffered from heat strokes, fatigue fractures, back pains, and other injuries and illnesses. Me too. I’ve suffered from tendon problems in my fingers,” said Okawa.Since the facility was established three years ago, three workers have died under sweatshop-like working conditions.“As expected deaths occurred,” “Tomorrow, it might be me” attitude had spread among workers. Okawa said “With working conditions being so harsh, even healthy workers are worried about risks to their health.”In response to an Akahata inquiry, Amazon Japan has insisted that the three workers’ death are not work-related. The online giant’s Japan subsidiary explained to Akahata that the company had reported the three workers’ death to the labor standard inspection authorities, but received no response from the authorities and no claim for workers’ compensation benefits from the bereaved families of the three workers. Amazon Japan refused to tell Akahata the causes of the three workers’ deaths by saying that that is personal information. However, the company admitted to the fact that many workers suffered from heat strokes, stress fractures, and other injuries and illnesses as Okawa pointed out.

Using an online discussion site called “2Channel (currently 5Channel)”, workers at e-commerce giant Amazon Japan have been exchanging their work stories and information. Workers at the Amazon Odawara FC warehouse center also set up their own “2Channel” forum. The number of messages posted on the forum exceeded 50,000.

The first death at the Odawara FC aroused heated conversations on the forum in which workers voiced bitter complaints about the harsh working conditions, especially the short rest periods.

Here is Odawara FC workers’ comments on the forum on December 29, 2013:

“I heard that a worker died at the warehouse.”
“A night-shift worker in his early 20s.”
“Recently, workloads have become heavier due to shorter rest periods. Take care, everyone!”
“To cut rest periods is reckless. Even for me. I’m in relatively good health, but am really tired from the work.”
“The company’s ‘do nothing unless something happens’ attitude has led to this tragedy. Anti-heatstroke measure is a case in point. Only after many workers suffered from heatstroke, the company finally implemented countermeasures.”

At a time when the Odawara warehousing and shipping center began its operation, the company provided a 30-minute rest break along with a lunch break. Later, it cut the rest break in half. Okawa Akira, who used to work at the facility, said that Amazon shortened the rest period in order to curb the rise in the number of workers. He added, “At the huge Odawara FC, my job was to operate a heavily-laden trolley. I was exhausted, but couldn’t recover from the exhaustion during the 15-minute rest because I have to go long ways to the staff lounge and bathrooms.”

Normal work hours at the Oadawa FC are 8 a.m. to 5 p.m. However, during busy seasons, workers are requested to arrive for work at 7 a.m. and work overtime. The night shift is from 9 p.m. or 10 p.m. to 5 a.m. or 6 a.m. in the morning. This is because Amazon operates fulfillment centers 24 hours a day.

Okawa said that according to his sources, the deceased 20-something worker worked during the night shift at the Odawara FC after working at another job in the daytime.

Okawa said, “Despite the hard work, we earn only 900-950 yen an hour, just above the regional minimum wage in Kanagawa. Many workers work more than one job in order to make ends meet. I think the reason why the deceased man chose the nightshift is that the pay rate is higher than in the dayshift.”