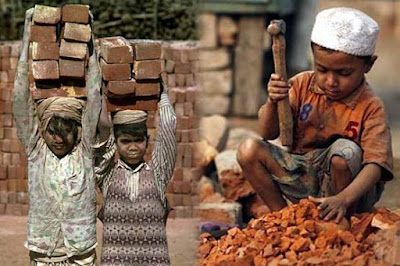 The World Federation of Trade Unions, representing more than 92 million workers in 126 countries worldwide strongly condemns the barbaric exploitation of the children as cheap labor force all over the world.
On the occasion of June 12th, World Day Against Child Labor, the WFTU reaffirm that the class-oriented trade union movement is fundamentally opposed and timelessly struggles against the capitalist exploitation and particularly the inhumane and bloody child labour.
With the outbreak of the capitalist crisis and the deepening of intra-imperialist rivalries, the exploitation of children is intensifying even more, always with a view to maximizing the profits of multinationals. Child workers are mainly employed in the sectors of agriculture, fishing and mining, while other children work even as modern-day slaves.


Even at the most advanced economies, underage exploitation is a fact and childhood is stolen from children. This happens because capital needs to take advantage of cheap labor due to the endless thirst for profits. Furthermore, monopolies from use children from the “Third world” as cheap labor while immigrant children often suffer double exploitation, even in regions that were boasting about having eliminated this phenomenon, such as Europe.
Nowadays, the World Federation of Trade union struggles for the prompt abolition of the child labor, as more than 200 million children aged 5-17 years are working all over the world. We also struggle against all the terms that figure in the laws of many countries, concerning “consent” of a child to work. We demand adequate protection of children from the labour in parallel with prompt covering and addressing of their contemporary needs such us public, free and compulsory education, ensuring leisure, recreation and healthcare.
The Secretariat.