Both President Donald Trump, as well as U.S. ambassador to the UN Nikki Haley, threatened with reprisals against countries backing the measure.  “The United States will remember this day in which it was singled out for attack in the General Assembly for the very act of exercising our right as a sovereign nation,” a defiant Nikki Haley, told the 193-member General Assembly ahead of Thursday’s vote.

“We will remember it when we are called upon to once again make the world’s largest contribution to the United Nations, and so many countries come calling on us, as they so often do, to pay even more and to use our influence for their benefit,” she said. 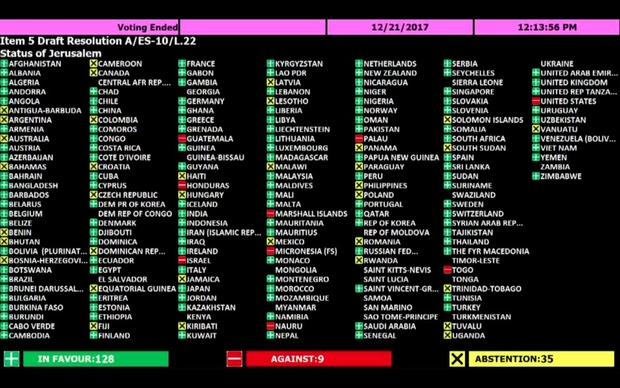 The countries which voted against the resolution, except from Israel and the United States, are: Guatemala, Honduras, Togo, Micronesia, Nauru, Palau and the Marshall Islands.

On behalf of the Palestinian leader Mahmud Abbas, spokesman Nabil Abu Rudeina said that "this decision reaffirms once again that the just Palestinian cause enjoys the support of international community, and no decisions made by any side could change the reality, that Jerusalem is an occupied territory under international law".

From his side, Israeli Prime Minister Benjamin Netanyahu condemned the UN vote, however expressing his satisfaction at the number of countries that didn't vote for the measure. "We reject the decision of the UN but we are satisfied by the high number of countries that didn't vote in favour of this decision," the Israeli Premier said in a statement.