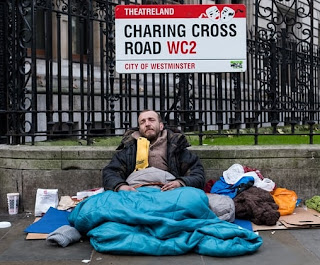 There are now just under 19 million people in Britain living below the ‘Minimum Income Standard’ (MIS), 11 million of whom are not managing but are sinking fast into a bottomless pit of debt and desperation.


The JRF report points out that Government policies are hitting certain types of families harder.

The JRF said 30 per cent of families in Britain — 18.9 million people — were living on an income below the MIS, an amount of cash that’s defined by the charity as “having enough to make ends meet”.

But more than 11 million people were well below the line, at below 70 per cent of MIS, the report shows, suggesting that they’re struggling to buy essentials and meet their bill repayments.

All low-income families, in or out of work, have lost money through Government policies, but some much more than others. The report showed that some groups, such as single parents who are not working or who are working part-time, and couples where one partner is working full-time whilst the other is not, are significantly worse off under current policies, often to the sum of thousands of pounds per year. These groups are projected to remain that way in future too.

The research, and an accompanying study also commissioned by the JRF, also revealed the often-conflicting effects of Government policies on those households struggling to get by. In other words, what they give with one hand they take with the other.

The living wage boosts the incomes of many groups, but in some cases the benefits freeze and other changes often take away even more money, leaving people worse off. The greatest shortfall for those in work is faced by single parents who are working part-time on the national living wage.

Under the new Universal Credit (UC) system, the amount of support workers receive from the Government tapers as their wages rise — a perfect poverty trap and disincentive to fight for higher wages.

The situation is tougher still for those under 25, who aren’t eligible for the national living wage but are still hit by benefit changes. Younger people were much more likely to be living in households below the minimum income threshold: 44 per cent of children are living in a house below the line, compared with 29 per cent of working age adults and just 15 per cent of pensioners.

Overall, the cumulative effect of Conservative policies between 2010 and 2017, and future policies already announced, helps families with two people in work — though not enough for them to reach the minimum income standard.

Previous JRF research has found around 4 in 10 families where one adult or no adults work are looking after children below school age, whilst three in 10 have at least one disabled member — meaning the families may find it difficult to work more to offset their losses.

Donald Hirsch, director of the Centre for Research in Social Policy at Loughborough University and the study’s lead author, said his research showed the Government’s flagship universal credit policy is risking a huge increase in child poverty.

“These figures show that there are a wide range of losers from present policies, with some of the worst-off families projected to have to live on barely half of what they need,” he said. “A few families will gain enough from the higher national living wage to offset cuts in benefits and tax credits. These, however, are the families who have the smallest shortfalls in their income, because they have two working parents.”