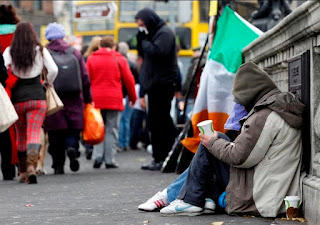 Dublin City Council is considering using a section of the Mountjoy prison campus to help deal with the capital's homeless problem. The Department of Justice has offered the training unit of Dublin's largest prison to the local authority, which is now considering it to house homeless people. The training unit is separated from the main section of the jail and was closed earlier this year.
At the time of its closure the unit had a capacity of 96 beds. Independent councillor Mannix Flynn said the council was considering using the facility to alleviate the city's current homelessness crisis. [...] The latest figures show there are 8,500 people without a home, 3,500 of whom are children, but there are fears the number could increase as the country heads into Christmas week, as the figures were compiled in October.

Dublin City deputy Chief Executive Brendan Kenny said that the Mountjoy training centre "isn't being ruled out", but that the Council's immediate focus is to have 200 permanent beds ready by next week.
Source: independent.ie.
Statement by the Communist Party of Ireland

16 December 2017
The Communist Party of Ireland condemns the proposal announced in news reports this morning to house rough sleepers and homeless people in the Training Unit of Mountjoy Prison.
The Mountjoy Training Unit is already being decommissioned, after it was found to be unfit for purpose. Even if it was, in principle, acceptable to house homeless people in prisons, the facility lacks in-cell sanitation. It is an insult to those who are forced to sleep on Ireland’s streets as a result of decades of failed housing policy to suggest that incarceration—no matter how well-meaning—is the answer.
Ireland’s long legacy of institutional answers to tough social questions was never more evident than in this issue. Whether it be Magdalene laundries, mother and baby homes, psychiatric institutional abuse, or the long dark stain of other institutions, the first option is to lock up anyone who falls victim to the social pressures visited on our country by its failed economic and social order.
The CPI calls on the Government to immediately recognise that we are in a housing emergency, and to launch a programme of public house-building.
A new system of universally accessible public housing, with rents based on ability to pay, is the only mechanism by which this blight on our society can be fought. It is time to grasp the nettle. We need a referendum to insert an unambiguous right to public housing in the Constitution.
In addition to calls for public housing there must be an immediate ban on economic evictions by banks and private landlords, to stop the increase in the number of rough sleepers on our streets. We also need a tenants’ bill of rights to protect tenants in the private rental sector and to stop precariousness in the housing sector generally.
This weekend twenty-one events are taking place nationally as part of the Campaign for Public Housing, of which the Communist Party of Ireland is a member, as part of the Weekend of Solidarity and Protest for Public Housing.
There is a demand for widely accessible and affordable public housing. We need homes, not prison cells.