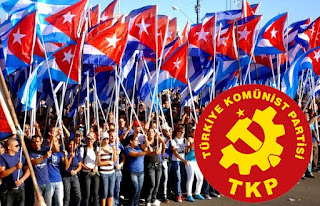 The lies and distortions on which Trump based his new Cuban policy focused on the allegation that human rights and political freedoms are violated in Cuba. Such allegation, which is a product of an incurable anticommunist imagination, is obsolete in the face of the dazzling facts of Cuba. The achievements of the Cuban people in terms of human rights and political freedoms represent the most advanced examples in today’s world. The president of the imperialist US, which has responsibility in every drop of blood and tear in each square centimeter of the planet, is qualified to neither offer patronage nor give lessons to the Cuban people.
Trump announced that in order to “free Cuba” he would further strengthen the blockade, severe tourism bans, and foster support to dissidents. The imperialist US goes full circle and clings to the same rotes, the same policies that have already bankrupted. Condemnation to bankrupt policies means desperation. Trump’s bullying tone cannot veil the desperation of the US imperialism.
Only those who have lost their minds by hatred and greed can be thrilled by a policy destined to bankruptcy and this is what happened actually. It is not a coincidence that in order to announce his “new” policy Trump picked Miami where the counterrevolutionary Cuban diaspora is settled. Yet, Pandora’s box is already open and the powerful reality of Cuba has already reached that city too. Even among the US citizens of Cuban origin, the majority supports the elimination of the blockade.
Being a sovereign country, it is only the Cuban people who can decide on the future of Cuba. The decision of the Cuban people is clear: They will defend the Revolution and continue to struggle until the economic, commercial and financial blockade imposed on the country is eliminated and the territory under the occupation of the US military base in Guantanamo is returned to its true owners.
The Communist Party of Turkey declares that it will be in solidarity with the fraternal people of Cuba and the Communist Party of Cuba.
Long live the Cuban Revolution!
Long live Socialism!
Central Committee.
Communist Party of Turkey.