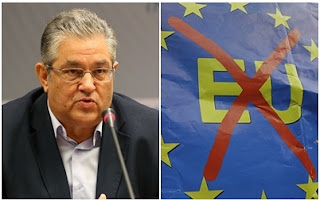 "The anniversary of the 60 years since the foundation of the EEC and later of the EU is celebrated by her founders, the capitalist member-states, the monopolies of the european states. Because the EU is their own creation for their own interests. It is not celebrated by the people of her member-states, because the EU has never been, is not nor can become people's EU.


On the question who has benefited, the people or the monopolies, the answer is given by the millions of unemployed, poor, homeless, uprooted, the people who must live with less than one euro per day. The answer comes also from the people of Yugoslavia, the Middle East, northern Africa against which the EU unleashed wars and interventions alongside the USA and NATO.

And in our country the great beneficiary was the capital, which fortified its political power, found new markets, especially in the Balkan countries. This fact is not altered by the crisis which worsened the position of the Greek capitalist economy within the framework Eurozone and the EU.

Our assessment that the cohesion of the EU and the Eurozone will be tested even more in the next period, that it may take different forms, not only in terms of states' dismissal but also of an EU-Eurozone of different speeds, is confirmed.

Since Greece's accession to the EU, the KKE revealed to the people her aims and aspirations, warned about the Maastrict, the EMU, fought against the antipeople-antiworker policies, against the myths of convergence and solidarity, the one-way, the "bogeyman" of isolation that PASOK and New Democracy were then raising. But also (the KKE fought) against the illusions of SYRIZA that the EU can become a pro-people union. Today, the position of these- failed in the eyes of the people- myths has been taken by new, variant ones, such as the one that argues for the "EU's return to its roots from which she- supposedly- has "gone astray". The leading role in this new deception belongs to the SYRIZA-ANEL government.

The KKE highlights the only pro-people way of the disengagement from the EU, for a development in favor of the people, with the working class in power. The political proposal of the KKE expresses, gives way to the popular discontent which is strengthening against the EU. (The KKE proposal) incapacitates the traps that parts of the capital are setting by calling the people to fight under its own flags."