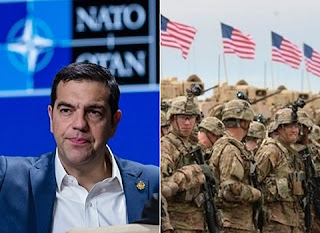 Back in 1999, during the bombing of Yugoslavia by NATO's imperialists, the port of Thessaloniki in northern Greece had been a major gateway for U.S. army. The then Greek government of Kostas Simitis, leader of the social democratic PASOK party, had been proved a valuable ally of the U.S-led coalition thus providing the country's ports and bases to the imperialists.

Today's Greek coalition SYRIZA-ANEL government, led by Prime Minister Alexis Tsipras, walks on the same path; it does anything in order to facilitate its imperialist "allies".

Thessaloniki's port, a significant cargo entry point in the Balkans, has been turned again into a focus point for U.S. Army's equipment deployment, within the framework of the Operation "Atlantic Resolve". According to the official website of the U.S. Army in Europe, "Atlantic Resolve is a demonstration of continued U.S. commitment to collective security through a series of actions designed to reassure NATO allies and partners of America's dedication to enduring peace and stability in the region in light of the Russian intervention in Ukraine."

As the U.S Army's report from Thessaloniki writes, eight UH-60 Black Hawk helicopters and more than 70 other pieces of equipment arrived at the Port of Thessaloniki as part of the 10th Combat Aviation Brigade nine month rotational deployment in support of Operation Atlantic Resolve Feb. 25.

The report continues as follows:

The arrival of 10th CAB adds to the aviation capabilities to train with our allies and partners as well as responding to crises should it be required. This is the first full aviation regionally allocated force to support OAR and U.S. Army Europe. "This is a great opportunity for interactions between Greek and American Soldiers in order to develop capacity, share lessons, and hone expertise," said U.S. Ambassador to Greece, the Honorable Geoffrey Pyatt who visited the port to observe and talk with U.S. Army and Greek military leaders and the Soldiers of the 10th CAB.U.S. military units are working with NATO allies and partners in Poland, the Baltic states, Bulgaria, Romania and Germany for rotational deployments focusing on training, exercises and maintenance purposes. "This is the most successful alliance in the history of the world," said Lt. Gen. Ben Hodges, U.S. Army Europe commanding general. "The port of Thessaloniki is a gateway into Europe and Atlantic armies could not prosper without our allies."
U.S. Army Europe's preparation for an increased presence across the European theater contributes to and strengthens the alliance's deterrence and defense. The forward presence of U.S. troops is essential to assure allies, deter adversaries and be postured to act in a timely manner if deterrence fails."Deterrence is about the agility of the United States Army. These helicopters came from Fort Drum, New York and just hours after the aircraft are coming off of the ship they are going to fly away from here and in about three days they are going to conduct an air assault operation in Romania," Hodges said. "In such a short amount of time, that kind of agility is central to what we do." The 10th CAB is arriving at three seaports and three airports throughout February and early March. This facilitation of movement has been assisted by multiple agencies ranging from military logistics units to civilian counterparts and in this instance, Greek Allies."This operation is the first time in recent years that the U.S. Army has used the port of Thessaloniki," Lt. Col. Jason Alvis, 839th Transportation Battalion commander said. The port was a primary Kosovo Force (KFOR) cargo entry point between 1998 and the early 2000's. During that time, NATO Allies processed over 557 ships between 1999-2001.Greek military aviators and key leaders welcomed their military Allies and expressed aspiration in looking forward to working together more often. During the assembly of helicopters, U.S. crew chiefs and pilots invited their Greek counterparts to engage in the action and medics from both countries exchanged knowledge of tactics, techniques and procedures."This is great opportunity to enhance our cooperation," Lt. Gen. Alkiviadis Stefanis, Greek Army chief of staff said. "The Greek position offers stability, and we also offer the Alliance and the professionalism of our Soldiers. We are very proud to have you here and we are looking forward to enhancing our cooperation."