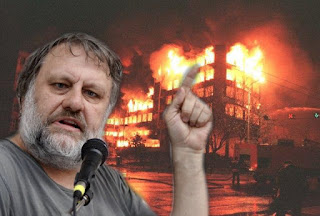 Someone could mention numerous cases where Žižek shows his real political face as a pseudo-marxist intellectual. However, on the occasion of the 18 years since the beginning of NATO's horrific crime in Yugoslavia, we present the views that Slavoj Žižek himself had publicly shared. While the bombs of the imperialists were killing hundreds of civilians in Belgrade, Novi Sad, Pristina and throughout Serbia, the Slovenian "philosopher" was promoting NATO's mission.

In his article titled "NATO, the Left Hand of God" (1999), Žižek was mentioning among other things:

Today we can see that the paradox of the bombing of Yugoslavia is not the one that Western pacifists have been complaining about -- that NATO set off the very ethnic cleansing that it was supposed to be preventing. No, the ideology of victimization is the real problem: it's perfectly fine to help the helpless Albanians against the Serbian monsters, but under no circumstances must they be permitted to throw off this helplessness, to get a hold on themselves as a sovereign and independent political subject [...] But it's not only NATO that depoliticized the conflict. So has its opponents on the pseudo-Left. For them, the bombing of Yugoslavia played out the last act of the dismemberment of Tito's Yugoslavia. It acted out the end of a promise, the collapse of a Utopia of multi-ethnic and authentic socialism into the confusion of an ethnic war. Even so sharp-sighted a political philosopher as Alain Badiou still maintains that all sides are equally guilty. There were ethnic cleansers on all sides, he says, among the Serbs, the Slovenes and the Bosnians. [...] It seems to me that this represents a leftist yearning for Yugoslavia lost. The irony is that this nostalgia considers the Serbia of Slobovan Milosevic to be the successor of that dream state -- i.e., exactly the force that so effectively killed that old Yugoslavia. [...] 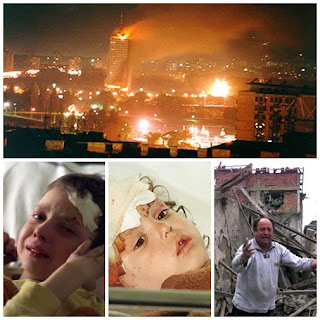 Furthermore, Žižek was also pointing out: "Threatened by Serbian nationalism, even Slovenian and Croatian nationalism preserved a respect for Titos Yugoslavia, in any case for its fundamental principle, that of the federation of equal constituent states with full sovereignty, including the right to secede. Whoever overlooks that, whoever reduces the war in Bosnia to a civil war between various "ethnic groups," is already on the side of the Serbs [...] It Was Serbian Aggression Alone, and Not Ethnic Conflict, That Set off the War."

Žižek's pro-imperialist stance in the case of Yugoslavia's bombing had been defiant and disgusting. That is what he was writing in another article, under the title "Against the Double Blackmail" (1999):

"So, on the one hand, we have the obscenities of the Serb state propaganda: they regularily refer to Clinton not as "the American president," but as "the American Fuehrer"; two of the transparents on their state-organized anti-Nato demonstrations were "Clinton, come here and be our Monica!" (i.e. suck our...), and "Monica, did you suck out also his brain?". The atmosphere in Belgrade is, at least for the time being, carnavalesque in a faked way - when they are not in shelters, people dance to rock or ethnic music on the streets, under the motto "With poetry and music against bombs!", playing the role of the defying heroes (since they know that NATO does not really bomb civilian targets and that, consequently, they are safe!). This is where the NATO planners got it wrong, caught in their schemes of strategic reasoning, unable to forecast that the Serb reaction to bombardment will be a recourse to a collective Bakhtinian carnivalization of the social life... This pseudo-authentic spectacle, although it may fascinate some confused Leftists, is effectively the other, public, face of ethnic cleansing: in Belgrade people are defiantly dancing on the streets while, three hundred kilometers to the South, a genocide of African proportions is taking place...".

The charlatan called Žižek was not only a pathetic apologists of NATO' horrendous crime against the people of Yugoslavia, but he wasn't pleased enough by the barbarity of the imperialist army. He wanted more bombs! 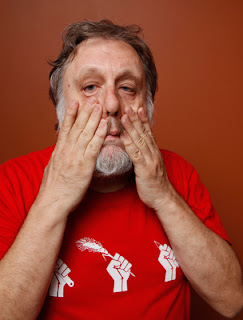 "So, precisely as a Leftist, my answer to the dilemma "Bomb or not?" is: not yet ENOUGH bombs, and they are TOO LATE".

Four years after the NATO war in Yugoslavia, the slovenian "philosopher" was saying during an interview: "To the horror of many leftists, even I did show some understanding for the NATO bombing of ex-Yugoslavia. Sorry, but this bombing did stop a terrible conflict."

This is the real face of the notorious Slavoj Žižek. He has been praised by many people in various ways- Terry Eagleton, the left literary critic, has called him the "most formidably brilliant" philosopher in Europe. The reality, however, is that Žižek is nothing but a flamboyant intellectual charlatan who- under the mask of pseudomarxism- has become one of the best apologists of imperialism and a disguised anticommunist.