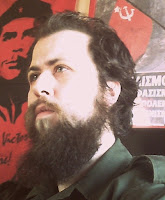 NATO's rape of Yugoslavia.
By Nikos Mottas.
Translated from the original Greek.

It was March 24th 1999- 17 years ago- when the NATO armed forces were starting a barbaric pounding against the people of Yugoslavia. A few kilometres north of the Greek borders, the North Atlantic wolf-pack alliance was putting it's bloodstained stamp on the 20th century's last big slaughter. It was then, when the balkan peninsula became, once more, the action field of imperialists and the federal republic of Yugoslavia (or what had remained from that) was crashing between the millstones of euro-atlantic interests.

It was the first time in NATO's history when a wide scale military operation was taking place without the- at least conventional- approval of the UN Security Council. Of course, the participating in the crime governments of the alliance's member-states (predominantly the US, UK, Germany, France) had already found the suitable pretext: It was the termination of the supposed “aggressiveness” of Slobodan Milosevic's government in the region of Kosovo. In order to justify the upcoming military intervention, the leaders of NATO's gang (Clinton, Blair, Schroeder, etc.) had been involved in an unprecedented public political staginess, pretending to be “worried” about the future of the albanian minority of Kosovo.

“We act to stand united with our allies for peace” Bill Clinton was stating in his- equal to an Oscar-level interpretation- nationwide statement just a few hours before the beginning of the bombings. Also, he was adding: “By acting now, we are upholding our values, protecting our interests, and advancing the cause of peace.”.

In the next lines we will see what “values”, what “interests” and what “causes” the NATO massacre was protecting...

On March 23rd, the then CG of NATO Xavier Solana gives the order to US General Wesley Clark for the beginning of the first airstrikes on serbian territory. Within 78 days, governmental buildings, hospitals, schools, public transport, bridges, whole blocks of residential buildings were literally destroyed- all that despite NATO's assurances that the bombs were exclusively targeting military infrastructure. Belgrade, Novi Sad, Nis, Pristina, Prahovo, smaller serbian cities and villages lived for more than two months the terror of NATO's crude barbarity.

On that point- examining the events from a historic distance of 17 years- it is significant to make some specific indications about the NATO involvement in Yugoslavia.

1. What were the real reasons that led to this NATO crime? Obviously, it wasn't the excuse(pretext) of the protection of the Kosovo minority. John Norris, a former communications director of the US deputy Secretary of State Strobe Talbott, writes in his book “Collision Course: NATO, Russia and Kosovo):

“The gravitational pull of the community of Western democracies highlights why Milosevic's Yugoslavia had become such an anachronism. As nations throughout the region strove to reform their economies, mitigate ethnic tensions, and broaden civil society, Belgrade seemed to delight in continually moving in the opposite direction. It is small wonder that NATO and Yugoslavia ended up on a collision course […] It was Yugoslavia's resistance to the broader trends of political and economic reform – not the plight of Kosovo Albanians – that best explains NATO's war”.

In fewer words, Milosevic's Yugoslavia became the “guinea-pig” of Imperialism in an effort to terrorize people. On the heads of serbian civilians they (the imperialists) tested the imperialist doctrine of “those who do not comply with the new international order will face barbarity”. What followed is known: Afghanistan, Iraq, Libya, Mali, Syria, etc. 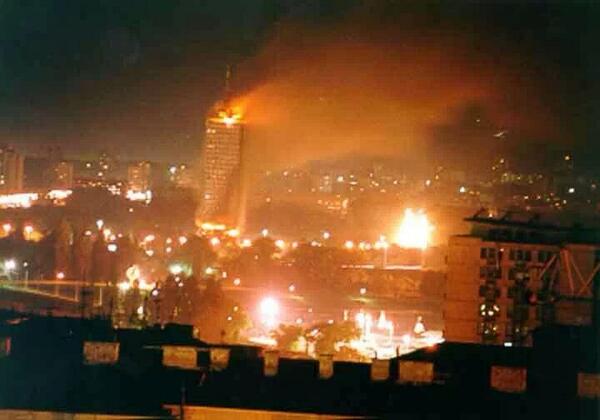 In order to have a clearer picture of the reasons that led to the 1999 NATO massacre, we must examine who were finally benefited from the destruction of Yugoslavia.

The desertification caused by the atrocity of NATO forces was followed by a “loot” of sell-out and privatizations of the country's state-owned infrastructure. European and US monopolies were benefited from that. It is estimated that in the post-Milosevic era, from 2000 to 2009, more than 1,800 privatizations of state-owned companies took place; the majority of the serbian metal industry was purchased by a US company, while the national automotive industry “Zastava” was bought by the italian monopoly “Fiat”.

This “reconstruction” was fully in line with a series of strategic choices and reforms (privatizations, sell-outs of public services, opening new markets, total destruction of working and social vested rights etc.) that would open the way towards the future affiliation of the new serbian republic with the EU.

2. NATO- to which, according to Mr.Tsipras, Greece “undoubtely belongs”- is also responsible:

a) For more than 2,500 civilian deaths (apparently the belong to the so-called “collateral damage”), among them a large number of women and children.

b) For more than 12,500 injured civilians who literally felt upon their skin how Imperalism interprets “Democracy” and “Peace”..

c)For the approximately 15 tones of depleted uranium which the NATO forces scattered in serbian territory. The use of depleted uranium (Q-Metal) is responsible for the rapid increase- after 1999- in the number of illnesses related to cancer, leukemia and genetic deformity in newborns.

The crime in Yugoslavia has specific culprits with full name: the then US President Bill Clinton, the then US Secretary of State Madeleine Albright, the US army General Wesley Clark, the NATO Secratary-General Xavier Solana. However, the abovementioned slaughterers had important accomplices; they were the heads of european social-democratic and center-of-left governments and political powers: the british PM Tony Blair, the German chancellor Gerhard Schroeder, the leader of the “Greens” in Germany Joschka Fisher. On them, we should include the then Greek government of PASOK which- despite it's hypocritical stance about “non-participation” in the crime- had transformed Greece into NATO's base.

We remind the debarkation of NATO forces in northern Greece and the port of Thessaloniki; we remind the military convoy that was passing through the central macedonia region towards Kosovo. We also remind that, according to official data given by the Hellenic National Defense Staff- the then government of Mr.Simitis had provided permission to: 60,000 NATO soldiers, more than 40,000 army vehicles, 420 NATO warships, 1000 war-planes and more than 500 trains containing military equipment to pass through Greek territory. In simple words, the then Greek government – which supposedly “didn't participate in the war”- was an accomplice of NATO in Yugoslavia's massacre.

NATO's atrocity in Yugoslavia was the last big slaughter of the 20th century. On the same time it marked something new: the beginning of a new “international law”, completely “tailored” for the imperialist interests – for the interests of monopoly capital. On the dismembered body of Yugoslavia, the imperialists tested the 21st century's law; the same “law” that was later appied in Afghanistan, Iraq, Libya and Syria. Seventeen years later, the imperialists continue to re-divide whole regions and engrave borders with people's blood.
Posted by In Defense of Communism