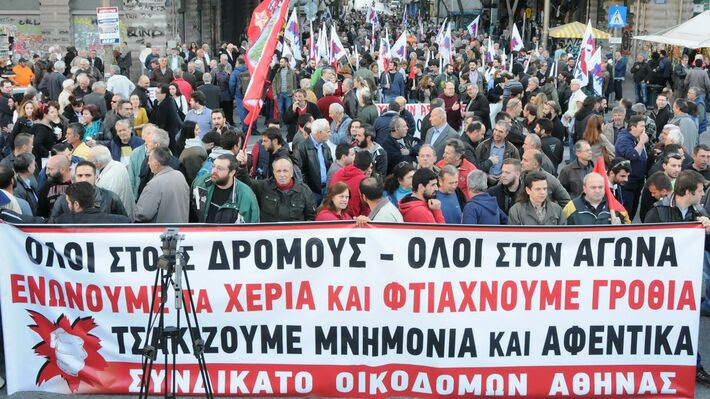 ATHENS- "The law-guillotine for social security must not pass in the Parliament". That was the message that thousands workers, unemployed, retired and self-employed people who participated in a mass rally organised by PAME (All-Workers Militant Front) sent on Thursday afternoon. The rally took place in Athens' Omonia square and the major speaker was the member of the executive secretariat of PAME Giorgos Perros.


Comrade Perros expressed the condemnation of the class trade union movement towards the new draft law about the refugee issue that the SYRIZA-ANEL coalition government brings to the Parliament. Additionally, he called the working people to manifest their disaproval of the recent EU decision regarding the refugees in a new demonstration tomorrow.

The rally was attended by the General Secretary of the CC of the Communist Party of Greece Dimitris Koutsoumbas. Speaking to the journalists, c.Koutsoumbas said the following:

"The completion of the negotiation (note: between the government and the creditors) will mean a new 'Golgotha' for the working people. Now, what is needed is a more dynamic response from the people".