December 30th marked the 100th anniversary since the founding of the world's first workers' state, the Union of Soviet Socialist Republics.

The creation of the USSR was the practical result of the 1917 Great October Socialist Revolution, the single most important event in modern history that became the first conscious step for the transition from capitalism to socialism and the abolition of the exploitation of man by man.

In its 69 years of existence, despite all its existing flaws, weaknesses and mistakes, the Soviet Union proved the superiority of the socialist system over capitalism. Contrary to the prevailing bourgeois propaganda about the “failure of socialism/communism”, the USSR became the site of unprecedented achievements for humanity in all areas of social life. For the first time in history, under the leadership of the Communist Party, a higher organization of society, radically different from all the previous systems, was achieved.

Those who, unscientifically and unhistorically, vilify the Soviet Union and the other socialist states claiming that “communism failed”, should have in mind that socio-economic systems do not prevail overnight. It took centuries of bloody struggles for the capitalist system to prevail over feudalism. Thus, the setback that occurred with the counterrevolutionary developments in the 1989 – 1991 period does not overturn the laws of class struggle nor does it erase the necessity and relevance of Socialism.

The answer in the question “why did the Soviet Union collapse?” can be found in the violation of the laws of socialist construction that began in the mid-1950s, primarily as a result of the opportunist strategy adopted at the 20th Congress of the Communist Party of the Soviet Union. The adoption and implementation of a series of revisionist policies in a range of sectors, primarily in economy, led to the weakening of Central Planning and social ownership. The starting point of the counterrevolutionary process was when the Soviet leadership tried to solve existing problems of the socialist construction with capitalist methods and tools (e.g. introducing market policies, etc).

Today, 100 years since its foundation and 31 years since the lowering of the red and sickle flag from the Kremlin, the defense of the contribution made by the Soviet Union and the 20th century socialism, is inextricably linked to the strengthening of the contemporary struggle against capitalist barbarity. Today, the lessons from the Soviet Union's decisive contribution to the Peoples Great Anti-Fascist Victory in the Second World War, as well as the Soviet internationalist solidarity towards nations that were fighting against colonialism, remain absolutely relevant. The 100th anniversary of the founding of the USSR gives us a brilliant opportunity to remind some fundamental achievements of the socialist construction in the former Soviet Union.
Women's Rights:

The great 1917 October Revolution paved the way for the social emancipation and liberation of the working class women. Before the October Revolution, in Tsarist Russia, woman was subject to various class and sex-based discriminations, with 80% of them being unskilled workers earning half the salary of their male colleagues. In pre-revolutionary Russia, 87% of women did not know to read and write. One of the Revolution's first decrees was to grant complete political rights to women; in Britain that happened in 1918, in the USA in 1920 and in France in 1944.

In the Soviet Union there was stable and permanent work for everyone, no more than 41 hours per week. For those working in less healthy job conditions the labour hours were reduced to 36 hours/week. The working week in the Soviet Union was one of the shortest in the world, while every working man and woman had the right to leisure every week, along with stable annual- full pay- allowances.

Rest and leisure was not a privilege- as it happens in Capitalism- but a right according to Article 119 of the Soviet constitution. The socialist state provided a large network of free cultural and sports institutes which were at the disposal of the people. The first house of leisure was built in Petersburg (Leningrad) in 1920, being an initiative of V.I.Lenin himself. In the beginning of 1940 there were already 3,600 houses of leisure which could serve almost 470,000 workers, while in the 1980s there were more than 14,000 leisure and vacation centers for 45 million people.

The public healthcare system that was established in the Soviet Union consists a significant example of socialist construction. In Soviet Russia there was a broad state network of healthcare, based on the centrally-planned socialist economy, which provided free services of medical care for the whole population. Numbers speak by themselves: Before the October Revolution, in Tsarist Russia, the life expectancy was just 32 years. After 1917, within a few years, the life expectancy raised to 44 years (1920). In 1987, the USSR had the same life expectancy rate with the western world (69 years).

A unique achievement of Socialism's construction in the Soviet Union was the complete elimination of illiteracy and the rapid increase of the educational level. Before the 1917 October Revolution, only 37.9% of the Russian-speaking men and 12.5% of the Russian-speaking women knew reading and writing. From the very beginning, the Soviet government made a colossal effort to eliminate illiteracy. Numbers speak by themselves: Approximately 50 million adults learned reading and writing in the years between 1920-1940; in 1937, the 75% of the total population knew how to read and write. By the decade of 1960, illiteracy had completely eliminated.

There is literally no sector of science during the 20th century in which the Soviet Union wasn't a leading force. Every year, 20%-25% of the annual inventions throughout the world, in almost every aspect of technology, belonged to the USSR. In the decades following the October Revolution, the poor, semi-feudal Tsarist state was transformed to a superpower, with an extensive industrialization and rapid increase of agricultural production, that played a leading role in the exploration of the outer space. The first human who traveled to space was a Soviet citizen, Yuri Gagarin. Vladimir Demikhov, a Soviet doctor, was a pioneer in the transplantation of vital organs. Soviet physicist Grigoriy Ayzenberg was the inventor of Radio Antenna, while Yuri Denisyuk invented the 3D holography. The Soviet Academy of Science was the birthplace of MESM, the Small Electronic Calculating Machine. Soviet scientist Igor Kurchatov and his team were behind the development of the first nuclear power plant, while the ancestor of today's mobile phones was a 500g wireless phone produced in the USSR. 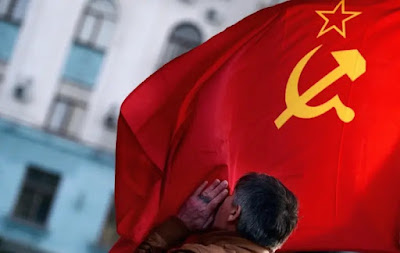 Soviet Union was the home of some of the most emblematic figures of arts of the 20th century: From music composers such as Sergei Prokoviev, Dmitri Shostakovich, Aram Khachaturian, to authors and poets like Maxim Gorky, Vladimir Mayakovsky and from iconic filmmakers like Andrei Tarkovsky and Sergei Eisenstein to dancers, painters, sculptures, actors, etc.

A whole encyclopedia isn't enough in order to include the immense contribution of the Soviet Union in sciences, culture and sports. The major conclusion, nonetheless, is one: The USSR proved socialism's superiority over capitalism. Contrary to capitalist barbarism, the socialist system, the workers-controlled Central Planning of the economy and the social ownership of the means of production, managed to satisfy the people's needs by eliminating the exploitation of man by man. That is why a large part of the Russian people, especially those who lived in the Soviet period, despite the heavy anti-communist propaganda of the last three decades, still reminisces the days of the USSR.

Today, capitalism in its imperialist stage has nothing more to offer to the people, except from poverty, misery, inequalities, wars and environmental destruction. That is why the struggle for another society, the struggle for socialism is more relevant than ever before. The Soviet Union, the large heroic fatherland, remains a beacon that shows the way. The 21st century will be the era of new victorious socialist revolutions and we are here to make it happen.