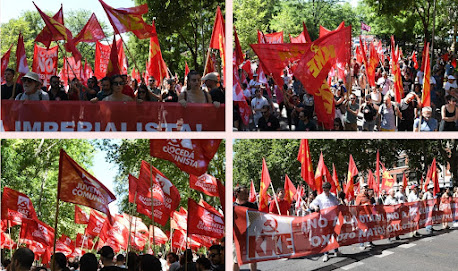 Members and supporters of the Communist Party of Greece (KKE) and the Communist Party of the Workers of Spain (PCTE) participated in a militant joint bloc, shouting slogans in both Greek and Spanish, such as “OTAN no, Bases FUERA”, “In Greece and Spain the people demand NATO and bases to go away”, “Viva KKE! Viva PCTE!”, etc. The protesters also expressed their solidarity to the detained young communists, Mikhail and Aleksander Kononovich, who remain imprisoned in Ukraine.
Other blocs of demonstrators included the World Federation of Democratic Youth (WFDY), other Communist Youths which are members of WFDY, the World Peace Council (WPC), as well as peace committees organizations from Spain, Portugal and Greece.

As 902 portal reported, police officers showed unacceptable and provocative behaviour towards KKE MEP Lefteris Nikolaou-Alavanos who was participating in the rally. Without any apparent reason, police stopped him and demanded to search his bag, despite the fact that he showed them their identification, including his diplomatic and civilian passport.
At the end of the rally, near Plaza de Espana, the General Secretary of the CC of the Communist Party of the Workers of Spain (PCTE) Ástor García thanked the KKE delegation for its participation and underlined the significance of proletarian internationalism stressing out that “with today's rally we denounce imperialism and the governments that participate in it, including the social democratic government of Spain”.

Secretary García also added: “They try to convince us that the struggle against NATO is outdated. Today we are proving that the fight against NATO, against imperialist wars is more alive than ever, in Madrid, in Athens, in all over the world. We continue the struggle vigorously, against capitalist exploitation, against any of its managers, in the fight for socialism-communism, the only prospect for a world of peace for humanity”.
It must be noted that since Friday, a group of KKE and KNE members from Greece are in Madrid, visiting various places of historical significance and participating in joint events alongside the PCTE. On Sunday, the KKE delegation visited Fuencaral cemetery where more than 400 fighters of the International Brigades, including Greek communists, are buried.