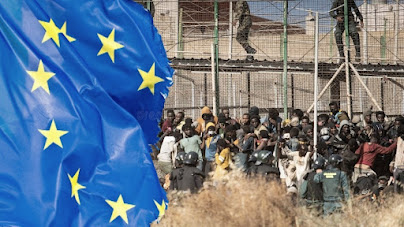 The EU Parliament Group of the Communist Party of Greece (KKE) strongly condemned the criminal policy of the EU and its governments that resulted in the recent tragic massacre of migrants in Melilla.
During a debate in the Committee on Political Liberties (LIBE), in the presence of EU Commissioner Ylva Johannson, KKE MEP Kostas Papadakis made the following intervention:
“We condemn the heinous crime of dozens of deaths, police violence and even half-dead refugees on the Morocco-Spain borders, a mere example of the EU's brutal political repression that names the uprooted people as “invaders”. We denounce the cynicism of Sánchez Government, the one that receives “congratulations” for being a “worthy” host of the Summit of NATO which plans new imperialist wars thus feeding refugee flows.

What do all these people, in Greece and Europe, who talk about the “air of progress” brought by the social democratic Government in Spain, have to say? Neoliberal and social democratic governments are promoting the same reactionary policy of the EU in the Aegean Sea and throughout the Mediterranean, as well as in Denmark, deporting refugees to third countries.

This is a double-standards policy: Formal reception with huge shortages for Ukrainian refugees and misery for the rest, which is a result of the implementation of the Directive we are discussing. You have to take a stand in relation to this unacceptable discrimination, for the fact that there are two parallel systems (on refugees), the formal reception and the savage repression”.