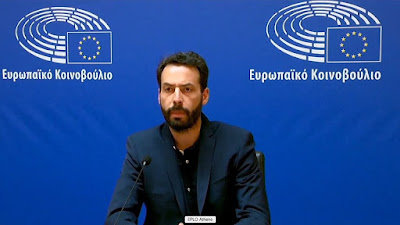 The MEP of the Communist Party of Greece (KKE) Lefteris Nikolaou Alavanos intervened in the debate convened in the European Parliament on Cuba, denouncing the anti-Cuban machinations.

In his positive and supportive statement, the Greek communist MEP said: “A known group of reactionary MEPs linked to US interests proposed this fraudulent conversation and a motion on Cuba; and the European Parliament executes on behalf of the EU. The deceptive pretexts of the US, NGOs and their agents related to so-called human rights are a serious provocation and serve to intervene in the internal affairs of Cuba.

Those who have imposed the blockade against Cuba for decades, in addition to 240 other sanctions that the Biden government maintains, are speaking about human rights, depriving the Cuban people of essential materials. Those responsible for the failure of commercialized health and the millions of victims speak out, while Cuba under blockade protected the health of its people, advanced in the development of vaccines, kept cases and victims at low levels and has a very important contribution to combat the pandemic in the world. We condemn the unacceptable motion at the expense of the Cuban people. We express our full solidarity with Cuba and its people. We demand the immediate end of the barbaric blockade of the United States government and of all measures against Cuba. "

Once again the Communist Party of Greece (KKE) reiterated its solidarity with the Cuban people and its condemnation of the criminal economic, commercial and financial blockade of the United States against Cuba.