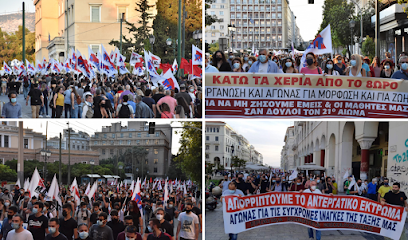 Under the slogan “the monstrous draft law must be abolished – hands off the 8-hour working day”, a large demonstration took place in downtown Athens, being the prelude of the nationwide strike that will be held on June 10th.
Thousands of workers, young men and women, trade unions and pensioners, sent a militant message of unwavering struggle against the governmental policy which seeks to intervene in the working time in favor of the big employers and capitalists.

In Athens' Syntagma Square, the rally was attended by the General Secretary of the CC of the Communist Party of Greece (KKE) Dimitris Koutsoumbas who made the following statement to the reporters:

“The anti-labour legal monstrosity of the ND government cannot be improved; it should not even be submitted in the Parliament. It must be withdrawn now. We are here today and we will be every day in the streets of struggle in order to defend the fixed daily working time, the 8-hour working day, against the policy which takes us back to the Middle Ages when we need to move forward. When we need to claim and secure the 7-hour working day, the 35-hour working week, the five-day week, so that the Sunday holiday will not be abolished and the workers to be able, through their unions and collective democratic processes, to decide the forms of struggle they want to follow, for the demands and the content of their claims. The struggle may be difficult but the working people are going to be the ultimate winners”. 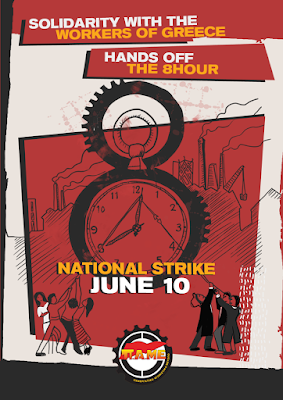 Similar demonstrations took place in Thessaloniki and other big cities. The next step of the struggle against the anti-labour draft law is the nationwide strike on July 10th.

The All-Workers Militant Front (PAME) calls everyone in the struggle against the barbaric bill of the Greek Government with new date for the National General Strike on June 10.

The Government’s aims at the heart of workers’ rights, the 8hour day, the collective trade union action, the union, the right to strike.

The militant action of the past months, the initiatives of the class unions have helped to reveal the contents of the bill. We have responded to the huge lies and the propaganda of the Government. Their plan to impose the bill without reactions has failed.

The tactics of their puppet within the unions, the GSEE (member of ETUC in Greece) which calls for adoption of the “positive aspects” of the bill calling for its “improvement” and their attempts to cultivate confusion will not succeed.