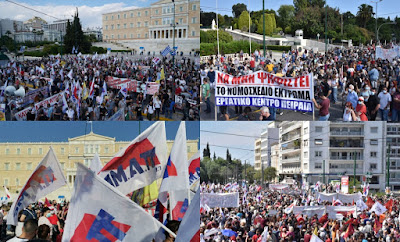 The omnibus labor bill - which strengthens medieval working conditions - was approved during a plenary vote late on Wednesday, solely by ruling New Democracy (158 votes). All opposition parties (142 votes) rejected it in principle; however social democratic SYRIZA voted in favor of 56 single articles and KINAL 74 articles.

The parliamentary group (15 MPs) of the Communist Party of Greece (KKE) voted against the omnibus bill, both in principle as well as to all articles, strongly denouncing the machinations of the government.

“Whatever you do, even if your MPs finally vote for this anti-labor bill, even if this rubbish becomes a law of your reactionary state and its mechanisms,  you know very well that it will not be legalized in the working people's consciousness, not for a moment. It has been irreversibly condemned there”, underlined Dimitris Koutsoumbas, the General Secretary of the CC of the KKE, speaking at the Parliament on Wednesday.

“The last word belongs to the working men and women, those who know well what exploitation means, they live it every day in their own skin”, Koutsoumbas said refering to the monstrous anti-labor bill that abolishes the 8-hour working day and trade union rights

The General Secretary pointed out that with this bill, Minister Kostis Hatzidakis surpasses his predecessors, G. Vroutsis and E. Achtsioglou, in anti-worker attitude and obscurantism because, stepping on the ground laid by the previous governments, he “intervenes directly in the heart of labor rights, which is the fixed daily working time”.

D. Koutsoumbas added that “the abolition of the fixed daily working hours has been at the heart of the European Union's guidelines for decades”, noting that it was the direction of all governments, neoliberal and social democratic ones.

Wednesday had been declared a nationwide 24-hours strike by Trade Unions, leading to massive demonstrations throughout Greece. The ND government, the ship owners and airport cargo companies filed restraining orders against the strike. They tried to ban the strike with court orders and slander but they failed.

Thousands of people, working men and women, students, self-employed people and pensioners gathered at Athens' Syntagma Square in the afternoon, during the voting of the omnibus bill, sending a powerful and militant message against the anti-worker policies of the government.

The message was clear: The people have the power to repeal the monstrous law in practice.