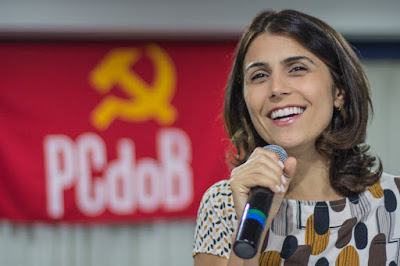 Since February 2nd, when former federal deputy Manuela d'Ávila made public the latest threats against her, a great wave of solidarity and repudiation over the cowards’ attacks has emerged on social networks. On the other hand, the criminals, expressing their entire monstrosity, threatened to rape Manuela's daughter who has only five years old. And they also threatened, once again, to assassinate Manuela.

There have been much more threats, more often starting from her prominence in the 2018 presidential elections, when she was a candidate for vice president of the Republic and more recently when in 2020 she was in a second turn electoral dispute for mayor of the city of Porto Alegre.

Manuela has been a victim of the Bolsonarist’s digital machine of hatred and intolerance, and targeted by thousands of false news -fakenews. In defense of democracy and the people’s reputation, Manuela created the Institute E Se Fosse Você? (What if it were you?) with the purpose of combating fake news.

Now, beyond an avalanche of lies, criminals have reached the refinement of cruelty, targeting a child with threats. This criminal and systematic attack against Manuela is not an isolated event. It is part of the emergence of nefarious methods used by Bolonarist’s neo-fascism to naturalize violence in social and political life, to destroy social justice policies, ideas and honesty, and also to encourage those who promote misogyny, racism and homophobia.

The Communist Party of Brazil (PCdoB) is in solidarity with Manuela, one of the main political leaders of the country and of our Party, and plays together with personalities and leaders from the political, democratic and progressive fields, a movement that demands the competent authorities to hurry strict and punish the criminals. This movement of solidarity with Manuela and her daughter is extended to all victims of the hateful persecution that Bolonarism carries out against those who struggle and fight for the defense of life and democracy, vaccination and emergency aid, employment, education and rights.

Manuela, who gave so much to Brazil in recent years now needs our solidarity and will have!

National Executive of the Communist Party of Brazil (PCdoB).