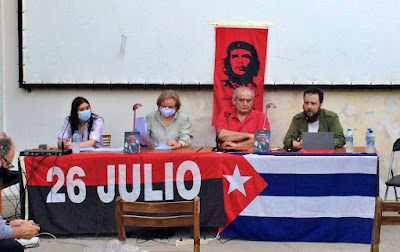 The book about communist revolutionary Ernesto Che Guevara, written by Nikos Mottas, was presented during an event in Athens on June 23rd.

The book, published by "Atexnos" publishing house, focuses to the role of Che as a leader of Cuba's Foreign Policy during the first post-revolutionary years, outlining the Argentinian communist's internationalist activity in world politics (read more here).

Except from the author, the speakers included Zelmys Maria Dominguez Cortina, Ambassador of the Republic of Cuba in Greece and Vasilis Paparis, member of the Hellenic-Cuban Friendship and Solidarity Association of Athens. The event's moderator was Velissarios Kossivakis, director of "New Star Cinema" and a staunch friend and long-time supporter of Cuba.

A special moment in the event was the reading of a special message sent by Che’s daughter, Dr. Aleida Guevara, who expressed her joy at knowing that her father’s presence continues to unite peoples and thanked Nikos Mottas for dedicating his time and efforts to research and compile the information displayed in the book.

In her speech, the Cuban Ambassador praised the personality and work of Ernesto Che Guevara characterizing him "a man of universal stature", a "tireless worker" and "an example of internationalism, an example for revolutionaries around the world". She highlighted the importance of the volume, which delves into that facet of the life of the Heroic Guerrilla as a diplomat of the revolution in different forums, including the United Nations. 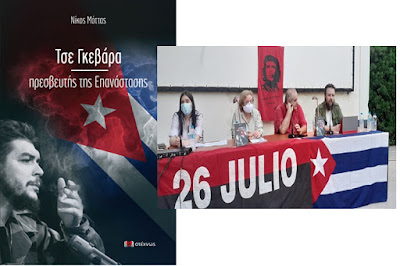 The event culminated with a broad exchange of questions and answers about the work presented and other current issues related to Cuba and the solidarity displayed by the Greek friendship activists between the two peoples.

In his book “Che Guevara, Ambassador of the Revolution” Nikos Mottas attempts to shed light to the role of Che as a leader of Cuba's Foreign Policy during the first post-revolutionary years, outlining the Argentinian communist's internationalist activity in world politics. Towards this direction, the book utilizes a plethora of sources, including English, Spanish and Greek bibliography, important state documents (press releases, transcripts, declassified CIA and State Department documents, etc) which provide significant information about Che Guevara's activity during his trips abroad.