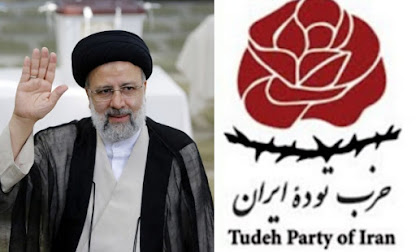 The Central Committee of the Tudeh Party of Iran boycotts the 18th June 2021 presidential elections based on its core policy of defending peace, democratic rights and freedoms, and social justice, and in the context of the struggle to realise the rightful demands of the working-class.

In its statement on 23rd May, the Central Committee of our Party addressed all national and democratic forces of the country, stating: "Progressive and freedom-seeking forces and the majority of the country's populace have come to the common understanding that the macro political structure governing Iran - the theocratic regime of Iran - is an immutable structure  [...] Merely hoping that the main director of this political system, i.e. the current Supreme Leader Ali Khamenei; those clergymen closest to him; and the IRGC leadership, will be willing to give up their means of power and repression based on the advice of the [country’s] 'benevolent' forces or because of their [own] belief in the future of Iran and the people, and to reform the regime or realise freedom and implement the will of the people over the country's destiny, is just a mirage that will only serve the continuation of the current authoritarian regime.  Therefore, the expectation of holding "free elections" under the current despotic regime, as the experience of recent years has shown, is hollow and wholly inconsistent with the nature and function of this regime.  In the current situation in Iran, saying "NO" to tyranny is only possible by refusing to participate in the current presidential campaign charade.”

“The only way to rid the homeland of the devastation wrought by the socio-economic, cultural, and foreign policies of this regime is to establish the people's rule; a rule that relies on the democratic mandate of the people, the preservation of territorial integrity, and the protection of the national interests and rights of every citizen of Iran.”

On June 16, on the eve of the presidential elections, the Tudeh Party of Iran addressed the Iranian people, stating: "Despite all the desperate efforts of the leaders of the Islamic Republic, including threats by the Supreme Leader about the consequences of not voting in the current elections, and bringing all political reserves to the fore - such as a number of so-called reformist press executives - to praise Ebrahim Raisi, whose hands are stained with the blood of thousands of freedom fighters of the nation, it is already clear that with the people’s vigilance and the joint efforts of the overwhelming majority of the country's national and freedom-loving forces and political and social activists in a decisive and coordinated boycott of this anti-people charade, this effort of the reactionary leaders will certainly fail."  The latest and most optimistic statistics released by the Ministry of Interior of the Islamic Republic of Iran based on conducted polls, predict the turnout will be between 37 and 47percent...  The lowest in the history of the presidential elections in the last 42 years!

In a televised address to the public on the same day, Ali Khamenei, while admitting that the regime was unable to hold "glorious elections", and admitting the success of the campaign to boycott the elections by the people and the overwhelming majority of the country's national and progressive forces, stated: "Some of those who expressed doubts about participating in the elections are from the marginalised and disadvantaged segments of society [...] The absence of people in the elections means they are distancing themselves from the system […] They complain and, in my opinion, these complaints are valid, but their decisions are not right."

The identity of the 'victor' of these presidential elections is almost a foregone conclusion...  The name of Ebrahim Raisi, the organiser of the national catastrophe of 1988 - the massacre of thousands of political prisoners - and current head of the oppressive judiciary, will somehow be drawn from the near-empty ballot boxes of this discredited process.  Regime officials will no-doubt try to present a false image of the historical NO to these sham elections, in order to disguise their historic failure and mask the great victory of the Iranian people and the national and freedom-loving forces of the country.

The Tudeh Party of Iran believes that the united effort of much of the country's social forces and political parties and organisations, in effectively and boycotting this electoral show, could be an important experience for all of us.  Together, with the common demand for putting an end to the ruling dictatorship, the way forward for a major social movement to challenge a regime already engulfed in a political-economic crisis of its own making can be opened.  Our Party has always believed that the theocratic regime cannot be reformed and that the only way to change the current deplorable conditions in the country is to fight jointly and in an organised manner based on a common platform.  This is why we welcome the view expressed in the declaration of a large number of political and social activists in the country, that: "In the present situation, the responsibility and duty of the independent reformist forces of freedom and popular justice, national-religious forces, by learning from the experience of the past failures and successes of the democratic movement of Iran to the present day, is the ever more clearly stated demand for national sovereignty, the establishment of the law-based system, the republic and democracy, and the principle of separation of religion from government [...] The realisation of such a demand in the political sphere is not possible except through the planning of a movement and front composed of national and democratic forces and advocates for democratic changes."

The scandalous show of the election on 18th June marks a decisive turning point and an end once-and-for-all to the theory that the Islamic regime in Iran can be reformed, - a system in which, under the term 'Republic', one figure, the Supreme Leader, actually rules over all the entirety of the country’s affairs and has brought our nation to a miserable and arduous situation.  The glorious and popular February 1979 Revolution succeeded with the aim of overthrowing the individual tyranny of the Shah, who declared himself to be the "shadow of God" on Earth.  The establishment of the political system of the Republic was one of the achievements of the Revolution - though this was soon slashed by the ruling clergy ascending to power and replaced by the absolute tyranny of the Supreme Leader.

The leaders of the Islamic Republic of Iran are well aware that our society is on the verge of significant and potentially decisive developments owing to the mounting economic pressures, dissatisfaction, and unprecedented hatred of various institutions of the government.  The only way to counter the plans of the Islamist regime is through the broad, conscious, and organized movement of a wide spectrum of social forces - from workers and peasants to pensioners, teachers, nurses, and other working people, women, youth, and students, and the country's national and progressive political forces."