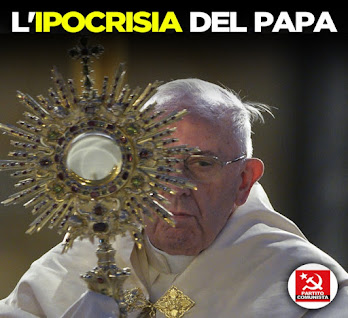 In fact, the Catholic Church in Italy, as well as abroad, enjoys many tax privileges, and among real estate and furniture enjoys a treasure of almost 11 billion Euros, in addition with everything that is owned by the church within the Italian state is exempt from IMU (Property Tax) and various state taxes, as well as enjoying 8 per thousand.

Finally, over the years, the Vatican bank (IOR) has been subject to a myriad of scandals, financial and non-financial, among which "the Sindona affair", the crack of Banco Ambrosiano, frequent relations with Cosa Nostra and even with the P2 of Licio Gelli.

The current Pope, however, continues to fill his mouth with beautiful words, even acceptable at times, but he continues to cover a system that for over 2000 years has been doing the opposite of what he says, acting like a big industrialist who continues to earn money and make some persons profit to the detriment of the whole community.

So NO dear Pope Francis, sharing ownership is by no means a Christian gesture, otherwise you would have done it forever and you would not have supported over the years the worst reactionary governments that have destroyed the lives of entire peoples".