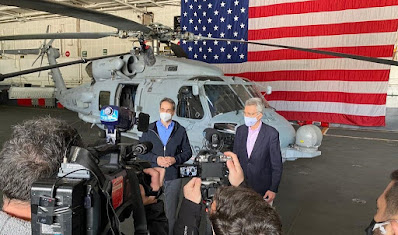 Mitsotakis - a staunch proponent of Greece's participation in the North Atlantic alliance - used the opportunity to highlight the close defense relationship that has been established in recent years between Greece and the United States and referred to the "historic ties" of the two countries, on the occasion of the bicentennial of the 1821 Greek Revolution.

In its statement the Communist Party of Greece (KKE) calls Mitsotakis' visit to USS "Eisenhower" a "symbol" of Greece's involvement in the dangerous U.S-NATO plans and points out that the historic parallels of the current Greek-U.S. stratetic cooperation shouldn't be searched in the links between the Greek and the American Revolutions but in the role of NATO as a modern "Holy Alliance".

More specifically, the statement issued by the Press Bureau of the CC of the KKE reads:

“Mr Mitsotakis' visit to USS «Dwight Eisenhower» aircraft carrier which is docked in Souda, which has been evolved into Mediterranean's “Pearl Harbor”, is another “symbol” of Greece's involvement in the dirty and dangerous war plans of the USA and NATO. The actual goal of this involvement is the geostrategic upgrade of the interests of the Greek bourgeois class and not of the Greek people.

The strategic dialogue and the military cooperation with the USA, which were promoted by the SYRIZA government and are being upgraded by the ND government, aren't a factor of security and peace for our people. Moreover, they are not a “counterweight” for the Turkish provocation, since the latter is backed by the Euro-atlantic forces. After all, before landing in Souda, the American aircraft carrier had participated in joint exercises with the Turkish Navy in Eastern Mediterranean.”

The KKE points out that in face of the dangerous developments in the region spanning from the Middle East to the Russian borders, the struggle to close down the Souda base and stop Greece's involvement in the dirty US-NATO plans becomes even more urgent and necessary.

“As for the historical parallels that Mr Mitsotakis looks for in order to “advertise” the current upgraded strategic cooperation between Greece and the USA, these do not exist in the links of the 1821 Revolution with the American Revolution, but in the role that today the USA and Greece play within the framework of NATO, the modern 'Holy Alliance'”, ends the statement.