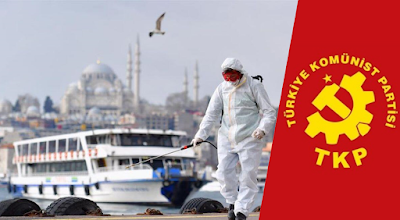 "The coronavirus pandemic, which has affected the whole world since the first months of last year, not only showed once again how devastating capitalism is as a social system but also showed the extent of its desperation. From this point of view, the pandemic caused by the SARS-CoV-2 virus cannot be seen as a health problem alone,” the report said.
The report consists of five parts. While it argues that capitalism is not fighting the pandemic, it puts forth that the capitalist order attempts to use the pandemic to compensate its weakness by attacking while the pandemic is also used to completely shut down the area of politics to the working class.

Education has collapsed in chaos

Education is one of the important issues addressed in the report in the context of the pandemic. The section on this subject is entitled "'Education has been handed over to chaos and collapsed'". It is argued that students have been out of school since March 2020 and millions of students have actually fallen out of the education system.

The report, which explains that children who stay away from face-to-face education in the pandemic face problems such as inactivity, nutrition, sleep, increased screen interaction, and the negative effects of social, emotional, psychological and other academic problems experienced by children due to being away from school will increase as experts remind.

One of the areas that experienced the greatest destruction in the pandemic is behind the scenes; from workrooms to studios, from offices to homes, it became a culture and arts space that expresses a huge industry that includes many professions, spaces, and many productions of different qualities. This area is evaluated under the heading "The pandemic caught the working-class unprepared intellectually and culturally" in the report.

The report ends with a 10-point call for the "emergency action plan of TKP". In the action plan prepared with targets for all the problems of children, students, and laborers, a demand that draws particular attention was formulated as follows:

In the announcements published by TKP, it is said that the report was "drafted by the Central Committee, taking the evaluations of many bureaus and organs of the party" and prepared as both an assessment of 2020 and a road map for 2021.

It is stated that TKP has been "trying to analyze the effects of the pandemic on the working class and to intervene in them through the committees formed by the party's experts over the past year, with the meticulous work of the Academy of Science and Enlightenment and organizational planning."

Click below to read the report in pdf (Turkish/Türkçe) 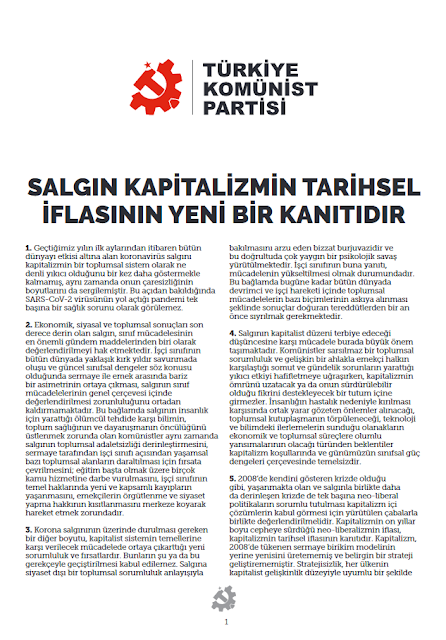