KKE: Solidarity with the people and the communists of India! 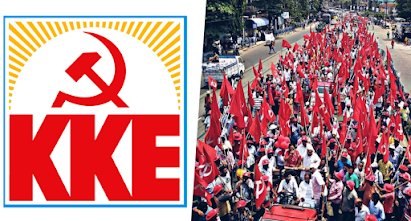 In a statement issued today, Wednesday 17 February, the Press Bureau of the CC of the Communist Party of Greece (KKE) denounces the policy of the Modi government in India and expresses its militant solidarity to the people and the communists of the country.

The KKE expresses its militant solidarity with the struggle of the workers, the poor farmers and the youth of India for their rights and the fulfillment of their contemporary needs regarding work, health, education, and life, which are crushed by the capitalist mode of production.

We denounce the Modi government, which, while bearing enormous responsibilities for the current situation that the working class and the other popular strata face, resorts to generalized terrorism and repression. It even reached to the point of cutting off the supply of water and electricity against the ongoing, mass mobilizations of landless and small farmers, who justly rose up against the package of measures that attacks the rights of toiling farmers, providing subsidies to monopoly capitalist enterprises in the field of agricultural and food production.

The KKE also unequivocally denounces the intensity of repression against the mobilizations of the people and the youth by the State Government of West Bengal, with extensive use of chemicals and water cannons, which have recently cost the lives of at least two militants – members of the Communist Party of India (Marxist) and its youth.

We address a “lal salaam” and express our support to the families of the comrades and fellow militants who have lost their lives as a result of state violence and repression, as well as to all those who have been struggling for months against the anti-popular policies of the government aiming to shield the profits of monopoly groups in the face of the new capitalist crisis accelerated by the COVID-19 pandemic.

Long live internationalist solidarity with the people and the Communists of India!