In their Joint Statement, 81 Communist and Workers' Parties from all over the world take a position on the global situation created by the pandemic of the novel coronavirus.

In the Joint Statement, initiated by the Communist Party of Greece (KKE), the CPs express their support to both doctors and nurses as well as those suffering from the disease and denounce the huge shortages in the public health sector which result from the anti-popular policy followed by the governments in the service of the capital, commercializing and privatizing health to support the profitability of the monopoly groups.

They emphasize that this particular situation shows the anti-social nature of capitalism as well as the necessity and advantages of the socialist society.

The Communist and Workers parties demand that all necessary measures be taken immediately to address the epidemic, with the support and strengthening of the Public Health Systems.

The full text of the Joint Statement, as well as the signatures, reads as follows:

Immediate measures to protect the health and rights of the peoples

The Communist and Workers' Parties are positioned with responsibility before our peoples. We are here! We are present at the forefront of the struggle to immediately take all necessary measures to protect the health and safeguard the rights of the working class and the popular strata everywhere!

We extend our heartfelt thanks to the doctors, nurses, the hospital and health units personnel that are fighting this battle facing great difficulties.

We express our solidarity with those affected by the CoVID-19 pandemic and wish them speedy recovery from the disease.

We salute the countries that develep solidarity actions with the most affected countries, such as the sending of protective materials and health professionals from countries such as China, Cuba and Russia, actions that are in stark contast to the absence of the European Union.

The CoVID-19 pandemic tragically proves the huge shortages of health systems in all capitalist countries that were known before the outbreak of the coronavirus. These shortages did not occur accidentally, they are the result of the anti-people's policy pursued by governments in the service of the big capital to commercialize and privatize health, to support the profitability of monopoly groups. This policy undermines the great scientific and technological capabilities available today to meet all prevention and healthcare needs of the people.

Today's experience reveals the anti-social and parasitic nature of capitalism and highlights the superiority and timeliness of socialism and central scientific planning based on popular needs, which can secure primary healthcare and prevention, hospitals, medical and nursing staff, medicine, laboratories, medical exams and everything else needed to meet the constant as well as any emergency health needs of the people.

The pre-existing slowdown in world economy is now being furtherly reinforced by the spread of the coronavirus and increasing the risk of a new crisis in the coming period. In spite of the propaganda about "unity", governments in the service of the big capital  focus their financial measures on the support of monopoly groups and will once again seek to throw the burden of the crisis on the workers and the other popular strata. The workers and the peoples cannot and must not pay again!

"Individual responsibility" cannot be used as a pretext to cover state and government responsibility. Today, taking the necessary measures also requires the struggle of the peoples against the policy of supporting the monopoly groups, which sacrifices the satisfaction of the needs and the health of the peoples at the altar of capitalist profitability.

The Communist and Workers' parties demand that all necessary measures be taken immediately to address the epidemic, including the following:

Immediate strengthening of public health systems by state funding, recruitment of full-time medical and nursing staff with full labor rights. Meeting all the needs of Intensive Care Units (ICUs) and the infrastructure needed for the full functioning of public healthcare and research services.

Immediate provision of all necessary means of protection (masks, gloves, antiseptics, etc.) by the state to the people free of charge and fight against profiteering. Provision of all protection measures to all healthcare personnel  giving this battle at the hospitals with sacrifices and at their own cost.

Protection of the income and rights of the working-popular strata. To put a brake on the unaccountability of the capital that under the guise of the CoVID-19 epidemic proceeds to massive redundancies and tries to furtherly trample over wage rights, working time, leave from work, and other labor rights. Immediate action to protect workers in the workplace.

No to any curtailment of the democratic rights of the peoples under the pretext of the coronavirus.

We say no to imperialist interventions and military exercises, such as those of NATO, and demand that public resources be redirected to support the needs of the peoples, such as the financing of public health and social security systems.


Parties signing:
Other Parties
The statement is open for further endorsments. 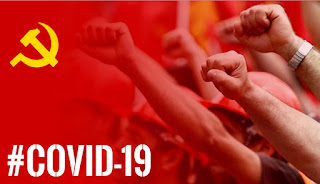