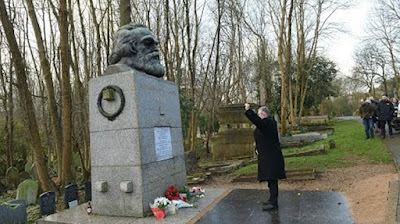 Dimitris Koutsoumbas, the General Secretary of the CC of the Communist Party of Greece (KKE), concluded his three-day stay in London with a visit at Highgate Cemetery where the grave of Karl Marx is located.

Accompanied by numerous members of the KKE and its youth wing KNE, Dimitris Koutsoumbas laid a wreath on the grave on behalf of the Party. With their fists raised the attendees shouted slogans such as "KKE, the people's party" and "A century of struggles and sacrifices, the KKE in the vanguard".

In a statement after the visit, cde Koutsoumbas pointed out the following: "The instruction of Karl Marx that 'the philosophers have hitherto only interpreted the world, the point is to change it', which was the meaning of his teaching's revolutionary character, is the timeless message that exists today and illuminates the future for the new generations, for the world's working class".