Massive electoral rally of the KKE in Athens sends message of struggle and hope!

Thousands of men and women of every age, workers, self-employed and unemployed people, students and pensioners gathered on Wednesday afternoon in Athens' Syntagma Square in order to attend the central electoral rally of the Communist Party of Greece (KKE).

Holding red flags and shouting slogans, members and supporters of the Communist Party sent a powerful message of struggle and hope, just 4 days before the parliamentary elections of July 7th. Dimitris Koutsoumbas, the Party's General Secretary, was the major speaker.


Koutsoumbas expressed his conviction that the KKE can be decisively strengthened in the elections of Sunday, stressing that the important is how powerful the people will be on the next day. He said  that "every next government of anti-people management will be the same and even worse than the previous one, because it builds on the existing anti-people framework", pointing out that it is significant for the KKE to be stronger, so it can fight both inside and outside the Parliament for the needs of the people.

In his speech, Dimitris Koutsoumbas unleashed an attack against SYRIZA, New Democracy (ND) and KINAL (PASOK) for the common policy in favor of the capital and the EU and underlined that the KKE puts forward the demands that meet the contemporary needs for the people.

"We are addressing our people" - said the KKE General Secretary among other things - "who have tried many management recipes. We straightforwardly tell them that now is the time to utilize their experience, to take the leap". The people must not provide any remission of sins to ND and SYRIZA.

Furthermore, Dimitris Koutsoumbas pointed out that "now is the time to throw to the garbage of history the nazi-criminal Golden Dawn", stressing out that only the vote to KKE is a guarantee for the isolation against Golden Dawn and other far-right parties like Velopoulos' "Greek Solution". 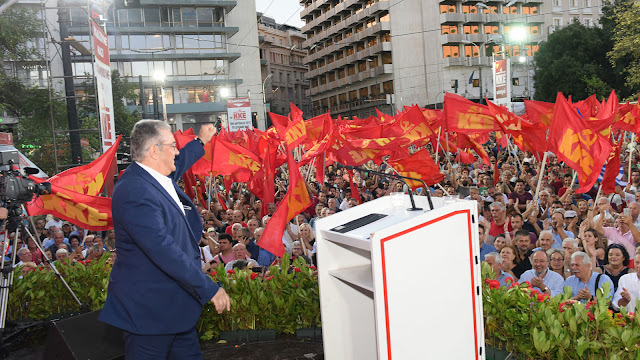 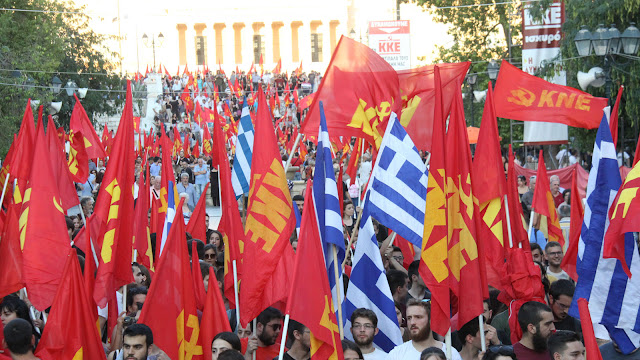 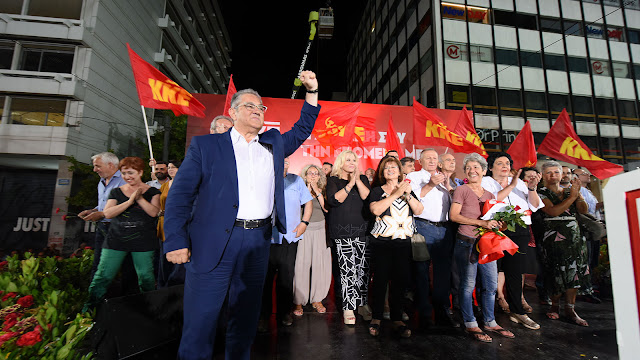 In the end of his speech, the General Secretary said: "Friends, comrades, we haven't finished yet, we are now beginning to give the fight of the last days, of the last hours until the closure of the polls. A fight in labour places, worker by worker, a fight house to house, from neighborhood to neighborgood, from village to village throughout Greece".

In a reference to the heroic tradition of the Greek communists, the ending of Koutsoumbas' speech sent a message of struggle and hope: "Friends and comrades - he said - lets take back the banner of EAM and ELAS, which SYRIZA dared to put next to the bloodstaind flags of NATO and the Americans. Come, so we can take back the images of our heroes. Of Velouchiotis, Beloyannis, of all our militant heroes who they (SYRIZA) dared to put in their bourgeois ministries where they write and sign their anti-worker, anti-people memorandum laws. The strengthening of the KKE is in our hands. A strong KKE is power for the people".

Following Dimitris Koutsoumbas' speech, greeting messages were delivered by candidates including Giorgos Roidis, Vice Admiral (Ret) of the Hellenic Navy, novelist and writer Eri Ritsou who is the daughter of the legendary communist poet Yannis Ritsos, while a message of renowed music composer Thanos Mikroutsikos was read  by the theatre and cinema actor Giorgos Kimoulis.