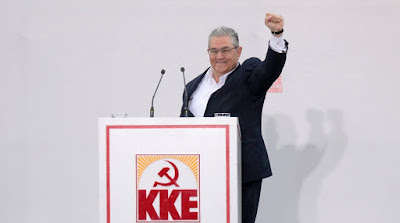 The General Secretary of the CC of the Communist Party of Greece (KKE), Dimitris Koutsoumbas, noted in his statement to the mass media:

«We would like to thank all those who today supported the lists of "People's Rally".

In the municipality of Patras, where Kostas Peletidis is reelected as mayor, we will continue with greater strength and drive, with new forces, the militant course in order to relieve the families from the popular strata, the people's rights, needs, against the suffocating institutional framework of local government, as well as against the anti-people political line of the governments as a whole in order to fight for projects that will protect the lives of our people.

And in the other municipalities, now as the opposition, we will fight for the great needs of the people, together with all those who joined forces with us, who took part in our militant electoral lists.

Today we begin the battle of the general elections that will take place on July 7th, with greater determination and optimism.

These elections will largely determine how strong the Greek people, people's movement will be the day after in order to organize their counterattack, in conditions characterized by the rise of conservative politics-due to the current government that resurrected ND and PASOK by continuing the same anti-people political line.

And this can only be ensured today by a much stronger KKE.

For this reason, the votes not only of the communists, but of all left-wing, progressive people, working people, must not be scattered left and right, to parties that have governed, to figures that have served as ministers, those that bled us all these years with their policies, to parties and choices that serve the same policies but use different slogans. Nor should they go to even more reactionary, fascist, far-right parties like Golden Dawn or Greek Solution.

The difficulties have not gone away. All the causes of the impasses and major problems for our people are still present. All the aforementioned share responsibility for this. Of course these problems are still here.

Good night and from tomorrow, everyone must throw themselves into the fight even more dynamically."