20th IMCWP in Athens: Declaration of 90 Communist and Workers' Parties 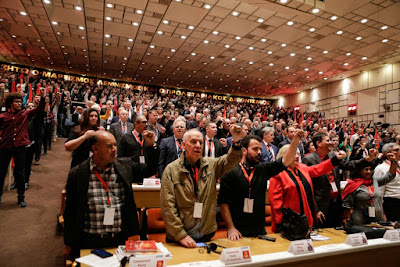 The 20th International Meeting of Communist and Workers’ Parties (IMCWP) took place on November 23-25, 2018, in Athens, hosted by the KKE, which celebrates 100 years of its historic course.
At the meeting under the theme of: "The contemporary working class and its alliance. The tasks of its political vanguard - the Communist and Workers' Parties, in the struggle against exploitation and imperialist wars, for the rights of the workers and the peoples, for peace, for socialism ", 90 Communist and Workers’ parties from 73 countries took part, representing all the continents.
The Parties’ representatives discussed the developments at the international, regional and national level, exchanged thoughts on the experience gained from the struggle of the Communist and Workers’ Parties in their countries, the common and convergent actions developed during the previous period, the class struggles in their countries, their efforts to promote the alliance of the working class with other popular and anti-monopoly strata.


They discussed the tasks for the strengthening of the communists’ struggle, the development of struggles of the working class and the other popular strata for the rights of the workers, of the people, of the youth,  in conflict with the monopolies, the power of capital and capitalist exploitation and oppression.
The contributions of the Communist and Workers’ Parties highlighted the exploitative, predatory and inhuman nature of capitalism. It was noted that the contradictions and competition of capitalist states and alliances are sharpening in a multi-faceted way on the terrain of either the crisis or capitalist growth; that the process of realignment of forces is advancing internationally.
Imperialist interference, blockades and interventions are continuing. There are still ongoing wars, such as in Syria, Yemen, Libya, as well as in Azerbaijan. The fratricidal war in Ukraine continues under the responsibility of the anti-people Kiev regime. Military armaments and war preparations are escalating.
The Communist and Workers' Parties welcome the struggles of the workers and the peoples around the world against the offensive of imperialism, against occupation, against any threats to sovereign rights and national independence, for peace, for the defense and the widening of social and democratic rights. The experience gained in many countries from the struggles against the imperialist plans and political line of the USA, NATO, the EU and their allies is valuable.
The sharpening of the contradictions involves the risk of new imperialist wars, for the control of wealth-producing resources, markets and energy pipelines; this  risk sets serious tasks for the workers' movement and the communists for the strengthening of a broad anti-imperialist struggle for peace and disarmament, the intensification of the struggle against the political line of bourgeois governments that serves the profitability of big capital and imperialist aggression and war.
The developments highlight that the struggle for peace, disarmament, respect for popular sovereignty, for the solution of the people’s problems and the satisfaction of the people’s needs is inextricably linked to the struggle for the overthrow of capitalist barbarity, for socialism.
The Communist and Workers' Parties assessed positively the initiatives taken in 2017 on the occasion of the 100th anniversary of the October Socialist Revolution and in 2018 for the 200th anniversary of the birth of Karl Marx, contributing to the defense of the Soviet Union's contribution, of socialism, which is the only way out of capitalist exploitation.
They reaffirmed their internationalist solidarity with the Syrian, Palestinian, Cypriot peoples; with the peoples of Lebanon, of Sudan, of Socialist Cuba, of Venezuela, of Brazil, of Iran, with all the peoples which face imperialist attacks and threats.
They condemned anticommunism and the attack on democratic rights and freedoms and expressed full support to the communists persecuted in Poland, Ukraine, Sudan, Kazakhstan, Pakistan as well as to the communists facing legal and political processes in Russia, Transnistria and elsewhere.
It was noted that in 2019 there are several important commemorations as the 100th anniversary of the foundation of the Communist International, the 70 years of the Chinese Revolution as well as the 60 years of the Cuban Revolution. These anniversaries could be utilized in order to strengthen proletarian internationalism; to defend the history and contribution of the Communist movement for the popular gains, for the struggle for progress, for the social emancipation of the workers and of the peoples in contrast to the falsification and distortion of the historical truth and the identification of communism with the fascist atrocities.
The Communist and Workers’ parties expressed their solidarity with refugees and immigrants. They  condemned racism, the dangerous fascist, far-right forces that arise from  the exploitative system and are directed against the peoples.
During the 20th IMCWP, a series of declarations of solidarity with the struggle of the peoples in many parts of the world were issued. 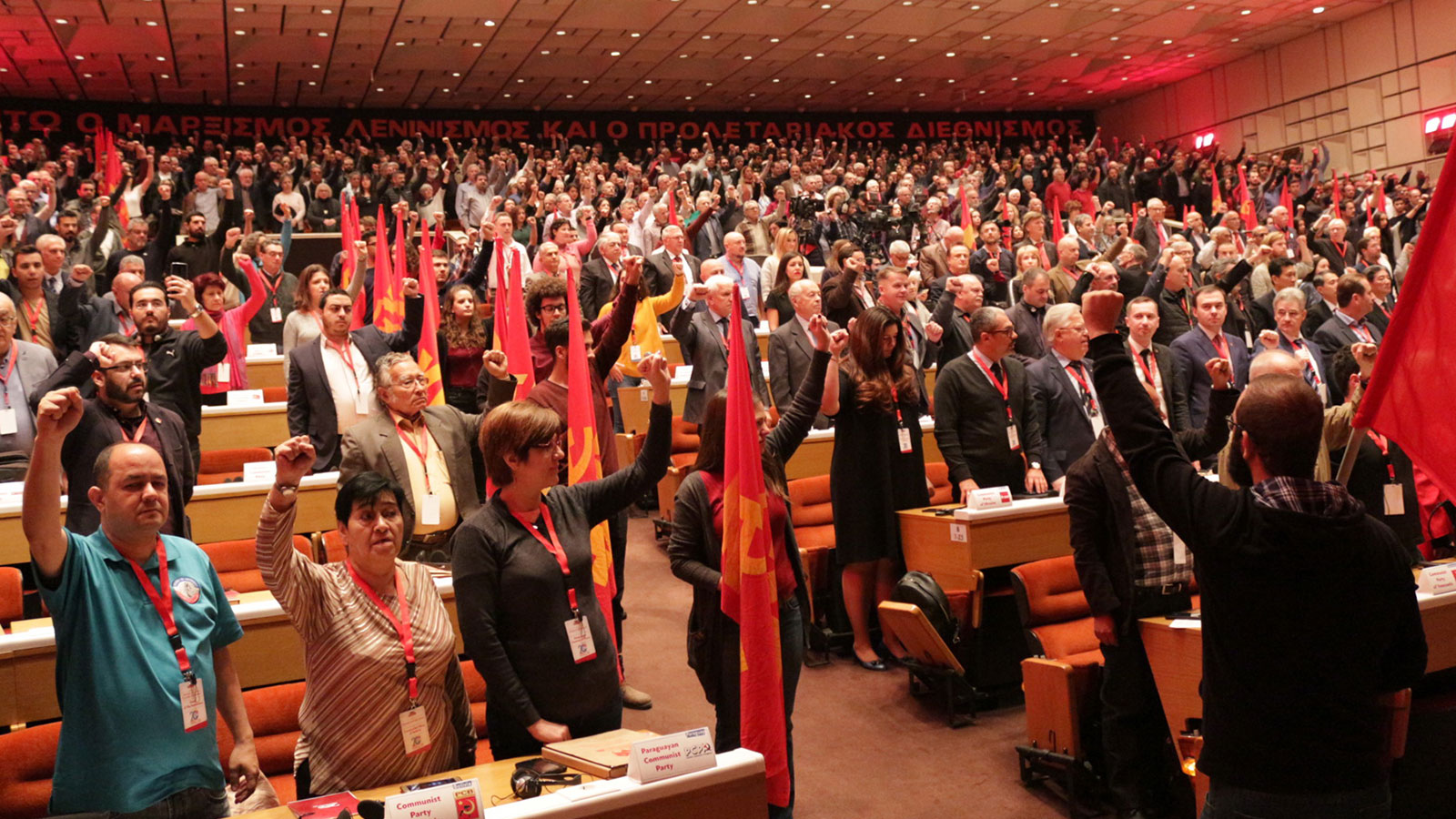 The Communist and Workers' parties call for the development of common and convergent actions in the next period along these main axes:
Against imperialist war, interventions and militarization.
Actions against NATO - whose 70th anniversary is on April 4, 2019 - and the EU, which is being further militarized with PESCO and other mechanisms. Against nuclear weapons and foreign military bases, utilizing the nuclear holocaust anniversary in Hiroshima - Nagasaki (on August 6 and 9) and the 80 years since the start of the Second World War (on September 1).
To defend the history of the communist movement and the values of proletarian internationalism
Multi-faceted events for the 100th anniversary of the Communist International (on March 2), actions against anti-communism, persecutions and bans of Communist and Workers' Parties. Utilization of the 102nd anniversary of the October Socialist Revolution to highlight the achievements of socialism and deepen the theoretical discussion and practical action against capitalism and its exploitative, oppressive, aggressive, predatory and inhuman nature.
To strengthen Internationalist Solidarity with the struggling peoples, which face occupation, imperialist threats and interventions
To strengthen internationalist solidarity and struggle demanding the end of the US blockade against Cuba and the interventions and threats against Bolivarian Venezuela.  To support the struggle of Palestinian people for the end of the occupation and self-determination, establishing a national, independent state with East Jerusalem as its capital, in accordance with the UN resolutions, supporting the resistance of the Palestinian people and condemning the criminal policy of Israel. To denounce imperialist interventions in the Korean Peninsula and express solidarity with the Korean people for independent and peaceful reunification. To express solidarity with refugees and with all peoples facing occupation, intervention and blockades by imperialism.
Multi-faceted class solidarity with workers' struggles for labor, social, trade union rights, against the offensive of capital.
Development of actions of struggle in workplaces and in particular on International Workers’ Day on May 1st, highlighting the vanguard role of the communists.
For Women's Rights and Emancipation
Development of actions of struggle on March 8, International Women's Day, to defend women's rights and their full equality in work and life.
Struggle for political and trade union freedoms and democratic rights against fascist forces, reactionary regimes, racism and xenophobia, religious fanaticism and social oppression.
Development of actions of struggle on the day of the People's Victory over Fascism-Nazism.
Development of actions to protect the environment
The participants thanked the Communist Party of Greece for hosting successfully this Meeting.
Source: Solidnet.org