Athens: KKE will honour the 100 years of the October Revolution with a large political and cultural event 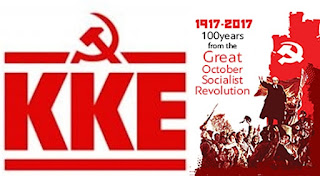 "They told us that the end of history came. But the people are those who write History. The October Socialist Revolution showed the way". With this slogan, the Central Committee of the Communist Party of Greece (KKE) organises a great political and cultural event in honor of the October Revolution's centennial, which will be held in Athens on Sunday 26th November.

The event will include a speech by the General Secretary of the CC of the KKE Dimitris Koutsoumbas as well as a cultural event dedicated to the 1917 Great October Socialist Revolution.

The event will take place at the Peace and Friendship indoor stadium, in the northern district of Faliro at 6.30 pm local hour.

THE SPOT OF THE POLITICAL AND CULTURAL EVENT