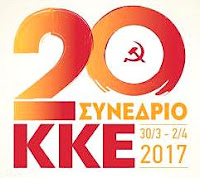 The Central Committee of the Communist Party of Greece (KKE) decided that the Party's 20th Congress will take place on the days from 30 March to 2 April 2017 in Athens. The two subjects of the Congress will be:

1. Activity report of the Central Committee from the 19th to the 20th Congress and the new tasks of the Party until the 21st Congress.

The publication of the Central Committee's theses for the 20th Party Congress will be published on Sunday's edition of 'Rizospastis', on December 18th.