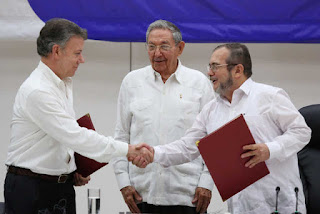 The agreement was finalized after four years of negotiations that took place in Oslo and Havana and aimed at putting an end to the armed conflict which began in 1964, when FARC-CP was founded as a response to the attack of the bourgeois army against the rural population of the Marquetalia region (1). At the same time, it had been announced that talks will also be pursued with the country’s other significant guerrilla organization, the National Liberation Army (ELN).


The massacre against the “Patriotic Union”.

Previous peace efforts had taken place in the past, with the most known being the talks and peace process in 1982-1984 with the Belisario Betancur government, which led to the foundation of the “Patriotic Union” (UP), as a legal party created by FARC-EP and the Colombian Communist Party. This process was literally drowned in blood by the bourgeois state and para-state. Within a decade more than 5,000 members and cadres of the “Patriotic Union” had been assassinated, including 2 presidential candidates, 7 senators, 13 members of parliament, 11 mayors and 69 municipal councilors, while thousands were forced to become political refugees abroad.

All these years, the USA, the EU and other imperialist powers stood by the side of the bourgeois state by providing generous economic, military and political support. The USA and the EU included FARC-EP in the list of terrorist organisations, while after the death of the FARC cadre Raul Reyes, in 2008 in Ecuador a real witch-hunt was unleashed, under the pretext of “information” that was found on his computer in their bombarded camp. On the other side, the overwhelming majority of Latin America's communist parties and many organisations of the peoples' and youth movement, regionally as well as internationally, stood by the side of FARC-EP and the country's popular movement.

Regarding the “Havana agreement”.

On 23 June 2016, the FARC and the government signed a final ceasefire and a disarmament agreement and on 24 August the 297 page-long final peace agreement, which was put to a referendum vote, was published. The 10th  Conference of FARC which ratified the agreement took place on 17-23 September.

The peace agreement consists of various agreements which are summarized in 6 chapters. It provides for a disarmament process of the FARC in 22 “transition zones- villages” and 6 smaller camps, where the FARC fighters would gather and stay for 6 months and where their private weapons would be gathered and destroyed by the UN, while 3 months after the beginning of the  peace agreement’s implementation the rest of their stored weapons would be destroyed.

The agreement reinforces the bourgeois state's monopoly on violence, the condemnation of the revolutionary struggle, promotes social consensus and assimilation, acknowledges that the upper hand belongs to the bourgeoisie and its state and in the final analysis undermines the class struggle.

For example, it is clearly written: “The Government and the FARC-EP agree […] to ensure the legal monopoly of the state on violence and the use of weapons...” (2), a formulation which, with variations, is repeated at several points. Furthermore, it is noted: “The national government and the new political movement which will arise from the transition of FARC-EP to legal political activity, undertake to promote a National Political Accord with the political parties and movements, the labour unions, the vital forces of the nation”.(3)

On the other hand, the agreement does not refer at all to important issues such as the 8 military bases of the USA or to the very significant issue of the agreement signed between Colombia and NATO during the negotiations on 25 June 2013.

The KKE and several organizations of our country's peoples movement, for many decades, stood in solidarity with the struggle of the Colombian people and FARC. They categorically rejected the characterization of FARC as a terrorist organisation and demanded its removal from the EU list of terrorist groups, as well as the abolition of the list itself.

The KKE demanded the recognition of the guerrilla organisations FARC-EP and ELN as warring parties, the release of those who are jailed in the US and of the more than 7,500 political prisoners in Colombia, the rehabilitation of those displaced. It expressed multifaceted solidarity with the struggle of the Colombian people for a Colombia without the exploitation of man by man, for peace with social justice. For a new Colombia, where the people’s will and soveriegnty will be respected, without hunger, but with jobs, houses, health and education for everybody.

We decisively confronted the bourgeois and opportunist forces which were using Colombia in order to attack the peoples' revolutionary struggle itself. The great difficulties of a prolonged struggle are evident, especially in conditions of a very negative correlation of forces, which are marked by the effects of the counterrevolution and the temporary retreat of the labour and revolutionary movement, by the crisis in which the international communist movement continues to find itself.

The additional barriers and the difficulties which arise from the generous support of imperialism to the Colombian bourgeois state- from the provision of modern means of warfare, from the intensity of the collaboration between the bourgeois states and their mechanisms in the area through a dense network of interstate alliances and organisations- are apparent.

The causes of the major problems that the Colombian people experience-repression, poverty and misery-are inherent to the capitalist system, the power of the monopolies, the bourgeois state, the bourgeois parties and their antipeople policies. And these remain intact after the deal.

The agreement is not judged on the basis of whether it leads to a change in the forms of struggles, something that is the responsibility and obligation of every revolutionary party or movement to choose depending on the conditions and the requirements of the class struggle in its country. The specific agreement is judged by whether (or not) it engages the peoples' movement of the country in serious, unacceptable concessions to the bourgeoisie and its power, which will disarm it politically and ideologically, thus objectively paving the way for developments that will lead either to the escalation of repression or to its cooption by the system, or to both simultaneously.

Firm internationalist solidarity with the labour-peoples movement of Colombia.

The working class, the popular strata of every country must advance their own interests, their own slogans and goals of struggle in opposition to the domination of capital and its power, in conflict with imperialism, for the right of every people to choose their own path of development. It is necessary to systematically monitor the developments and to maintain a decisive stance at the side of the labour-peoples movement, against any aim to exploit any developments to intensify the persecution and repression. We firmly express our internationalist solidarity with the struggles for the workers-peoples' rights, for the abolition of exploitation, for a new Colombia with the people in power.

(1)   Read the article “ Revolutionary Armed Forces of Colombia-People's Army – 37 years of struggles for the New Colombia”, by Raul Reyes on KOMEP 6/2001, especially written for KOMEP (Communist Review).
(2)   Page 70 of the agreement.(Unofficial translation from the Spanish original)
(3)   Page 72 of the agreement. (Unofficial translation from the Spanish original)