Communist Party, Turkey (KP): Enough is enough! Do not mess Syria up anymore! 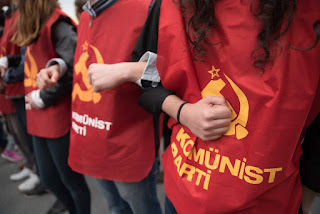 
The Isis, which the Turkish Armed Forces are attacking now, foremost owes its victories in the region to the AKP government. The most advanced of all the places, where this US made organization openly gangs up, hires assassins and organizes meetings, has been Turkey. AKP has treated Isis and other terrorist groups as if they were part of its own paramilitary forces and has used them accordingly. Just recently it has been revealed apparently how the intelligence units,to say the least, "did not prevent" the suicide bomb attack at the wedding celebration at Gaziantep.
It is not surprising how the sides of the fight and the peace get mixed and turn into chaos in a context of an administration crisis and lots of armed groups in the field. Yet, today's chaotic picture does not change the fact that the Isis has its strong replacements in Turkey. Nobody should believe this gang, having installed itself within the state and the government, would be defeated by being attacked at the neighbouring country.
There is no legal basis which allows AKP government to bring the Turkey's side of the borders into the use of the Islamic gangs other than Isis and to provide bases. The evacuation of the town Karakamış as a consequence of this policy, proves to be a tragic development of how our country has being sink into the war.  However, the argument that tells this precaution is for the security of the civilians is groundless. The region is being made unmanned and being turned into a war zone for good.
AKP has turned Turkey into a tool at the hands of the imperialist states, the regional powers and even some gangs.
The Jarablus operation should be stopped.
Turkey should surrender letting the military groups's activity.
Any organization pursuing destructive activities against Syria should be purged.
Turkey should not involve in any other activity than protecting the border security.
All the access and usage of the land, bases, aerial domain and other facilities of Turkey for the battles at Syria, should be terminated.
Communist Party, Turkey
24.08.2016