This is capitalism! Better.com CEO fires 900 employees over Zoom after getting $750 million from SoftBank 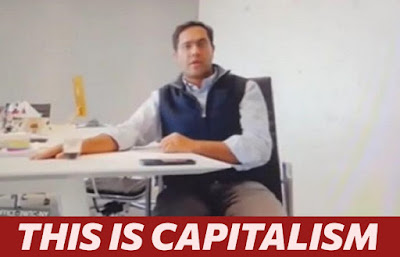 We read on CNN: "Better.com CEO Vishal Garg announced the mortgage company is laying off about 9% of its workforce on a Zoom webinar Wednesday abruptly informing the more than 900 employees on the call they were being terminated just before the holidays.

"If you're on this call, you are part of the unlucky group that is being laid off", Garg said during a Zoom call. "The market changed, as you know, and we have to move with it in order to survive, so that hopefully we can continue to thrive and deliver on our mission,” the CEO pointed out. “This isn’t news that you’re going to want to hear. But ultimately it was my decision and I wanted you to hear from me".

"Your employment here is terminated effective immediately", Garg said to the employees in an awkward one-way video announcement.

This is the barbaric, rotten system of capitalism. In a three-minute Zoom call, 900 employees were informed that they lost their job. Because "the market changed" and the company "has to move with it in order to survive".

However, this is not the end of story. As Forbers reports, the layoffs came as the company received a $750 million cash injection from its biggest backer, Softbank, ahead of its plans to go public through a SPAC merger with Aurora Acquisition Corp., giving it $1 billion in cash on its balance sheet!

But, as we said, this is capitalism. Rotten. Barbaric. Inhumane.