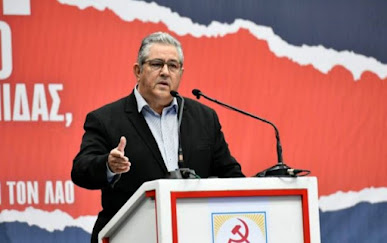 The Communist Party of Greece (KKE) has sharply criticised the policy of New Democracy government over Covid-19 pandemic, including the low vaccination rate and the dramatic situation in the public Health System.

In a comment issued on Thursday, the Press Bureau of the CC of the KKE points out:

“Instead of pointing their finger, the government and the Minister of Health should answer the critical questions:
Is it fake news that dozens of intubated people remain outside ICUs? Is it fake news the postponement of surgeries and other treatments because there is no intensive care coverage and because the public Health System has been blocked? Or, is it fake news that, instead of being requisitioned, the private health business sector is in itself a “VIP Health system” with huge profits even in pandemic conditions?”

It must be noted that the conservative government of Kyriakos Mitsotakis refuses to proceed to the requisition of private clinics, despite the fact that the existing ICUs cannot cover the needs created by the pandemic resurgence.

The low percentage of vaccination coverage in the regional unit of Serres was highlighted by the Communist Party of Greece's General Secretary Dimitris Koutsoumbas in meetings held on Wednesday with employees at the Serres General Hospital and with the city's mayor Alexandros Chryssafis and deputy regional governor Panagiotis Spiropoulos.

In his meeting with the doctors, nursing staff and employees of the hospital, Koutsoumbas said that his party had from the first moment supported vaccinations and the observation of protection measures, adding that the citizens should listen to the scientific community and follow their doctors' orders.

He made clear, however, that KKE's stance on this in no way exonerates the government and the prime minister and he spoke of "huge responsibilities and criminal mistakes made throughout the period of the pandemic".