KKE: Greek government's 2021 state budget is a "monument of unpopularity" 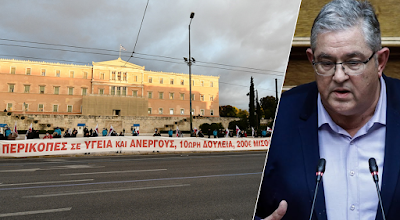 The 2021 state budget submitted by the conservative New Democracy (ND) government is a "monument of unpopularity against the working people", said the General Secretary of the Communist Party of Greece (KKE) Dimitris Koutsoumbas during a speech in the Parliament.

Koutsoumbas strongly denounced the policies of the government during the pandemic, adding that the measures announced aim at strengthening the capital at the expense of the workers and people's rights. The KKE General Secretary pointed out that ND, opposition party SYRIZA and all the other bourgeois parties in the parliament are "strategically aligned" in the same policy, despite minor differences.

He noted that the budget introduces "indirect taxes that amount to 56 pct of the tax revenues total, and brings a steep increase in the taxation of workers by some 3.5 billion euros more compared to 2020, a move that will bring workers to their knees while expecting a breather in 2021."

The anti-popular measures are not limited to the 2021 state budget, but they are also apparent in the Pissarides committee report, which he said aims "for a cheaper labor force that costs the state even less." It also increases taxation and social insurance contributions in favor of big investors, noted the communist party leader.

The 2021 state budget was approved by 158 votes in parliament after a five-day debate and a roll-call vote on Thursday night. Due to Covid-related safety protocols and concerns, some of the 300-strong parliament members voted by letter, while those present voted through the parliament's e-tally system.

Protest by Trade Unions outside the Parliament 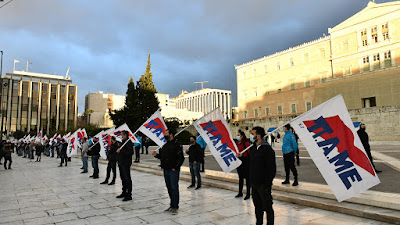 During the voting on the 2021 state budget. a symbolic protest was organized in front of the Greek Parliament in Athens by delegations of Federations and Trade Unions that rally with All-Workers Militant Front (PAME).

Giota Tavoulari, member of the Executive Secretariat of PAME and president of the National Federation of Workers in Pharmaceutical Industries (OEFSEE) stated:

“No budget can be pro-people when it comes from the power of the exploiters… The state budget for next year proves, in a dramatic way in the conditions of the pandemic, its character as a tool for distributing the wealth that comes out of the sweat of the workers for the benefit of business groups. As for some crumbs provided for the people, the workers are asked to pay them “double and triple”.

“The pandemic has clearly shown that the dead-ends of this system are being paid for with human lives and with the deterioration of the quality of life of the working class and the popular strata… the budget takes the baton from the previous anti-workers – anti-popular measures, continues the attack and at the same time channels money to the business groups and NATO armaments.

…We have no other option but to respond to this budget by highlighting and fighting today for our own needs. Our only path is to escalate our struggle against the government’s and employers’ policies…To crush the logic of the ‘lesser evil’, the beautification of this barbarism… We continue the struggle for the health and the rights of the people.”