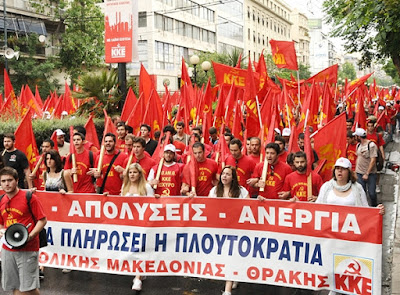 Earlier, in a statement, the centre-right opposition party of New Democracy (ND) had expressed disagrements with some of the provisions of the new antiworkers' bill forwarded by the government. However, ND agrees on the new law's amendment which actually tries to abolish the right of the workers to strike.


It must be noted that according to the new governmental bill, in order for a grass-root trade-union to declare a strike, 50% of the enrolled members should agree with it. Furthermore, it is a measure that the government intends to approve under the pretext of “democracy”, when at the same time in the workplaces the terrorism of the bosses rules supreme, the danger of layoffs for participating in a demonstration is imminent, especially in conditions where unemployment looms reaching particularly high rates.

"We are witnessing a competition between SYRIZA and ND on who can better implement a policy which is against the biggest achievement of the working class, the right to strike, to struggle, to claim her rights" said Giannis Giokas, KKE MP and member of the Party's Central Committee, during a radio interview.

Giokas also underlined that, in fact, the amendment prohibits the workers' right to strike at primary union level where employers' terrorism has created a condition of labour jungle.

Talking during a live TV program, the KKE politburo member Nikos Sofianos underlined that "this government does the dirty job that even New Democracy couldn't dare to do" and added: "On Monday night, SYRIZA, ND and other parties will vote together the bill which abolishes the right to strike".

Calling the people to participate in the strike of January 12th, as well as in other militant activities against the new laws, Sofianos said that "the government sows the wind and will reap the whirlwind, as far as it carries out a series of 'contracts', putting the people against the wall in collaboration with the EU and the industrialists".