In the last year, 170 leaders and social activists known for their various missions in defense of indigenous rights, coca rights substitution, Afro-Colombian rights, labor rights, and LGBTQ. The statistics show a sharp contrast from prior years where 2016 saw 117 and 63 in 2015.

The majority of violence has erupted in sectors left vacant by the guerrilla groups which have since been invaded by paramilitary groups. Of all of these, trade unions have risen to the top in the number of the nation's homicides and victims of violence and death threats, making Colombia the most dangerous nation for union members in the world.

Over the last 20 years, about 3,000 unionists have been murdered with an outrageous rate of impunity for the homicides measuring at 87 percent with thousands of death threats never being investigated.

“It is difficult to unionize in Colombia. Here, whoever complains is killed... And unfortunately, if we look at the statistics today, here in the municipality of Tumaco, we have roughly almost 60 unionists threatened or killed. We have 17 unionists dead, who are no longer with us just because they claimed the right to a dignified life, to land rights,” Carlos Diaz, Afro-Colombian leader and president of the teachers union, Seupac, told TeleSur.

Diaz related the case of a colleague who was an active representative of the Black communities and a member of the teacher’s union who was arrested and violently beaten within an inch of his life by police authorities after threatening to sue in the defense of educator labor rights.

“Today he is a quadriplegic who cannot speak, he stutters, he loses consciousness, his head was struck, he has multiple injuries all over his body and today, he’s running away...This partner, just because he made a complaint, they tried to silence him. They labeled him an enemy, as a government enemy,” he said, adding that simply sharing his perspective with TeleSur put him in the line of danger.

Diaz explained that extreme delays in the Colombian judicial process from one department to the next only aided the high rate of impunity to continue. Those who are subject to death threats are left to face their aggressors alone. Police will not react until the body of a unionist turns up on the side of the road, Diaz said. He added investigations will go on for years without ever reaching a conviction.

In an effort to maintain the situation, government officials have increased police forces by 9,000 units, however, many community members are wary of the teams of law enforcement infiltrating the country’s rural agricultural sectors.

“We do not trust them, because of so many things that have happened over the years. We have nothing against the police or against the army. We simply say that this is not the way. It increases the levels of violence instead of lowering them,” the Tumacan priest said.

According to a recent report published by the Institute of Studies for Peace Development, Indepaz, a Colombian non-governmental organization, the murders are highly localized to four regional departments: Nariño (28), Antioquia (23), Valle (14) and Choco (12). There were 32 assassinations alone in the community of San Jose de Apartado Cauca located in Antioquia.

Right-wing paramilitary forces continue to operate throughout the country inflicting terror on social and political movements, as well as on the civilian population.

While the peace process in Colombia has been welcomed by broad sections of Colombian society, the demobilization of the Revolutionary Armed Forces of Colombia has brought with it the swarming of paramilitary groups to rural regions the rebels left behind.

According to Leon Valencia, director of the Foundation for Peace and Reconciliation, there are whole families who are currently at risk due to the expansion of right-wing military groups who had once been deterred by the presence of the left-wing guerrilla group.

A month ago, the FARC handed in the last of its weapons to United Nations officials effectively ending 53 years of military war with the state. Many expected the demobilization of the country’s largest and most influential rebel group to mark the end of the devastating violence that has ravaged the country for decades.

However, the reality is that right-wing criminal bands continue to operate throughout the country inflicting terror on social and political movements, as well as on the civilian population in general. 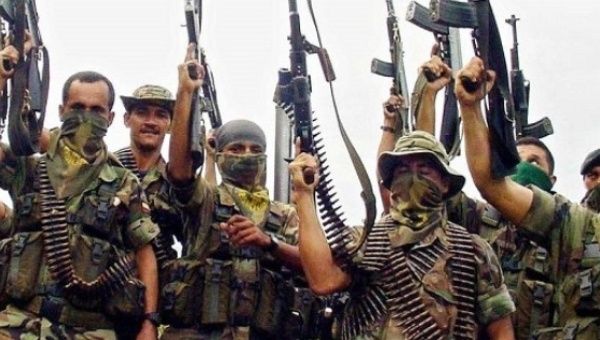 According to Periodistas en Español, for example, paramilitary groups have only recently re-entered San Jose de Apartado, a village that 10 years ago was the victim of one of Colombia’s worst modern day massacres at the hands of armed right-wing groups. Their presence in the area has been attributed to the FARC’s demobilization.

What’s even more concerning is that local military forces have been seen acting in cooperation with the paramilitaries with local residents reporting “commonplace meetings” between the two forces.

At a press conference Monday, FARC leader Ivan Marquez warned that the government’s lack of commitment to security protocols established in the peace accord was giving way to a resurgence of a “dirty war” by the ultra-right.

Since the demobilization process began, six demobilized rebels have been assassinated by paramilitary forces raising the concern of a repetition of the violence inflicted on the Patriotic Union party in the 1980s and 90s.

Juan Manuel Santos' government, which has previously denied the existence of paramilitary groups in the country, could eventually seriously dent or even lose the hard won peace agreement due to its failure to act to stop these increasingly destructive terrorist elements.