Workers Against Imperialism: Large anti-NATO rally to be held in Thessaloniki, Greece on June 24th 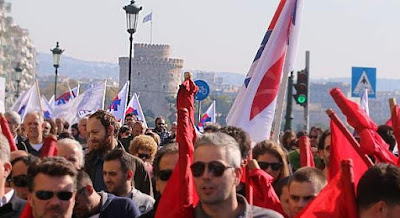 "WITH THE WORKERS OF ALL COUNTRIES, FOR A WORLD WITHOUT EXPLOITATION, WARS AND REFUGEES".

Within the framework of the Two-day Balkan Anti-War and Anti-Imperialist Action of Trade Unions, which will take place in Thessaloniki on 24-25 June 2017, the All-Workers Militant Front (PAME) calls for mass participation in a large anti-imperialist, anti-NATO rally that will be held in Greece's second largest city on Saturday 24th June. Numerous labor centers, workers' unions and branch trade unions from all over the country will gather in Thessaloniki, in order to participate in a demonstration outside the city's NATO headquarters (NRDC-GR) on the 24th of June.

In a statement, PAME points out that "the people have not any (common) interest with their exploitants, neither in peace nor in their wars. We rise the flag of the workers' interests! We have nothing to divide with the working class of other countries, with the other people. On the contrary, the common interest of the struggle for a life without exploitation and poverty, without bosses, with the people ripping the wealth they produce, unites us. This is the life that belong to us!".