Greece's farmers converge in Athens to protest against government-EU policies 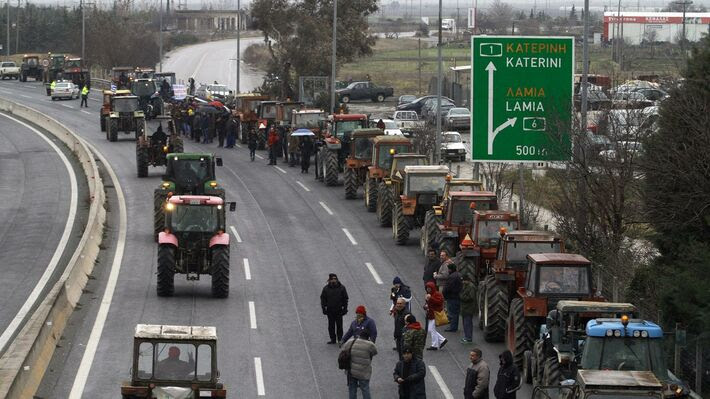 After 22 days in road blockades, small farmers are going to give a powerful response to the provocative intransigence of the government which has ignored their rightful demands.

After a decision by the national committee coordinating the farmers’ protests, a large rally is scheduled to take place in Athens today as a way of pressure towards the government. Already, since the early hours of Tuesday, thousands of workers with their tractors and pick-up tracks, from all over Greece, began their route towards the Greek capital.

Vangelis Boutas, member of the national committee of the protesting farmers, has called the people of Athens to show solidarity with the rightful struggle of the small farmers and join the rally. Statements which call for participation in the rally have been issued by the All-Workers Militant Front (PAME), the Panhellenic Antimonopolist Rally of the self-employed workers (PASEVE), the Federation of Greek Women (OGE) and other workers' unions and associations.

The General Secretary of the Communist Party of Greece (KKE) Dimitris Koutsoumbas is expected to attend the farmers' rally.

Meanwhile, civil servants’ union ADEDY has called for a work stoppage between 12.30 p.m. and the end of the shift tomorrow so that public sector workers can join the farmers’ rally in Athens on the same day.

The rally of the farmers has been scheduled to take place at Vathis Square, at 13:00 local time. 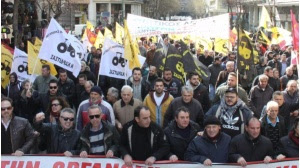 A farmers' demonstration was held in Athens, on February the 14th, organized by the Nationwide Committee of the Roadblocks against the policies of the SYRIZA-ANEL government and the EU, which is leading to the impoverishment of the small and medium farmers and to them being driven off the land, to the benefit of the monopolies and the big farmers.
The farmers have being carrying out mobilizations for 3 weeks now, closing the roads at dozens of points around the entire country.Farmers from 11 Federations, 35 contingents from the roadblocks and 120 local associations from all over the country took part in the mobilization.
Trade unions from the public and private sector, mass organizations, people's committees, self-employed associations, the Federation of Greek Women, the Students' Struggle Front, student unions demonstrated their support for the farmers. In this way, they practically expressed the slogan that was heard dozens of times at the demonstration: "Workers-farmers, one voice and one fist."
A large delegation of the CC of the KKE participated in the mobilization, headed by the GS of the CC, Dimitris Koutsoumbas, who mentioned the following in his statement to the journalists:


"The farmers here today in Athens are sending a resounding message that denounces these governmental policies, the EU as a whole, a message against all those who are driving them from their livelihoods, from their land. They are escalating their struggle in alliance with and in unity with the other popular strata, with the working class and the urban self-employed. Victory will belong to them. United we can all together be victorious."
Posted by In Defense of Communism