I was the son of a landowner—that was one reason for me to be a reactionary. I was educated in religious schools that were attended by the sons of the rich—another reason for being a reactionary. I lived in Cuba, where all the films, publications, and mass media were “Made in USA”—a third reason for being a reactionary. I studied in a university where out of fifteen thousand students, only thirty were anti-imperialists, and I was one of those thirty at the end. When I entered the university, it was as the son of a landowner—and to make matters worse, as a political illiterate!

…And mind you, no party member, no Communist, no socialist or extremist got hold of me and indoctrinated me. No. I was given a big, heavy, infernal, unreadable, unbearable textbook that tried to explain political economy from a bourgeois viewpoint—they called that political economy!
And that unbearable book presented the crises of overproduction and other such problems as the most natural things in the world. It explained how in Britain, when there was an abundance of coal, there were workers who didn’t have any, because by the inexorable natural and unchangeable laws of history, of society and nature, crises of overproduction inevitably occur, and when they do, they bring unemployment and starvation. When there’s too much coal, workers will freeze and starve!
So that landowner’s son, who had been educated by bourgeois schools and Yankee propaganda, began to think that something was wrong with that system, that it didn’t make sense…
As the son of a poor man who later became a big landowner, I had the advantage of at least living in the countryside, with the peasants, with the poor, who were all my friends. Had I been the grandson of a landowner, it’s quite possible that my father would have taken me to live in the capital, in a superaristocratic neighborhood and those positive factors at work on me wouldn’t have been able to survive the influence of the milieu. Egoism and other negative traits we humans beings have would have prevailed.
Luckily, the schools I studied in developed some of the positive factors. A certain idealistic rationality; a certain concept of good and evil, just and unjust; and a certain spirit of rebelliousness against impositions and oppression led me to an analysis of human society, and turned me into what I later realized was a utopian Communist. At the time, I still hadn’t been fortunate enough to meet a Communist or read a Communist document. 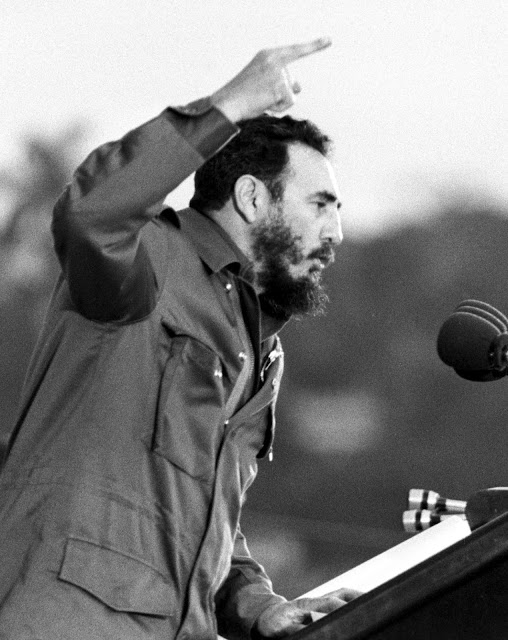 Then one day a copy of the Communist Manifesto—the famous Communist Manifesto!—fell into my hands and I read some things I’ll never forget… What phrases what truths! And we saw those truths every day!
I felt like some little animal that had been born in a forest which he didn’t understand. Then, all of a sudden, he finds a map of that forest—a description, a geography of that forest and everything in it. It was then that I got my bearings. Take a look now and see if Marx’s ideas weren’t just, correct, and inspiring. If we hadn’t based our struggle on them, we wouldn’t be here now! We wouldn’t be here!
Now then, was I a Communist? No. I was a man who was lucky enough to have discovered a political theory, a man who was caught up in the whirlpool of Cuba’s political crisis long before becoming a full-fledged Communist…
I went on developing. Afterwards, I had the opportunity to know imperialism more concretely than I had through Lenin’s book. I got to know imperialism—the worst and most aggressive of all… And I believe life has given me a better understanding of reality. It has made me more revolutionary, more socialist, more Communist…
** The text is the transcript of a Questions & Answers session between Fidel Castro and students at the University of Concepción, Chile, on November 18 1971 **