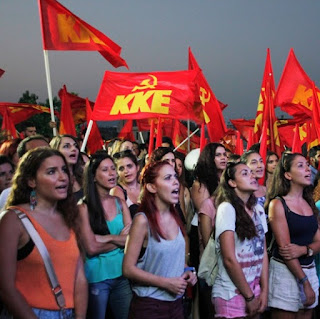 Information from 'Rizospastis' and 902.gr.

KILKIS- Numerous working class unions, students and women associations, various bodies of the labour-peoples' movement in Greece have condemned the prosecution by the police authorities of a young woman, member of the Communist Youth of Greece (KNE). The KNE member, a student at Thessaloniki's Aristotle Univerity, was arrested on November 7th outside a high school in the city of Kilkis, northern Greece, after a complaint by the school's director. Her "criminal offense" was that she was....discussing with students the organisation of mobilization and struggle against the governmental policy on Education!

Showing primitive anticommunism the Greek authorities arrested the young comrade and appointed a court hearing on December 2nd. The prosecution was immediately denounced by the KKE Kilkis Sectoral Organisation and the KKE MEP Sotiris Zarianopoulos who expressed their protest to the local police department.


It has been clear that the unfair prosecution of the KNE member consists part of a more general effort by the bourgeois Greek state to terrorize and repress the struggles of the students. It is characteristic that the prosecution of the KNE comrade is based on a 1951 law which actually regards any call for militant mobilization as a "crime"!

According to the Professor of Contemporary History at the Aristotle University, Giorgos Margaritis, "the persecution equates any call to militant mobilizations (abstain, protest, occupation, protest) to invitation for committing a crime or misdemeanor. Therefore, it restores in the legal but primarily in the political spotlight the framework of restriction of freedoms and political repression which prevailed in post-civil war Greece".

The prosecution of the young member of the Communist Youth is a totally unjust and repressive action which aims in terrorizing the students movement. The SYRIZA-ANEL government is accountable for this primitive anticommunist stance of the Greek authorities.

The effort to terrorize the students and the labour-popular movement shall not pass.