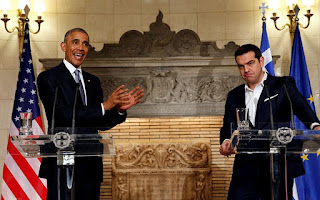 The bourgeois Greek media already celebrate the visit of Barack Obama in Greece, dedicating hymns to how- supposedly- valuable (for Greece) this visit was. The reality is different. The visit of Obama in Greece, during his last foreign trip as U.S. president, has two major conclusions: The first has to do about the continuation of the antipeople, antiworkers measures which the Greek government will continue imposing and the second is connected to Greece's deeper involvement in the dangerous US-NATO-EU warmongering plans in Eastern Mediterranean.

The meeting between Obama and Prime Minister Alexis Tsipras was accompanied with assurances about the continuation of harsh antiworkers measures, despite Obama's hypocritical "wishes" about the need to end austerity. After all, President Obama congratulated Tsipras for the antipeople reforms. "We cannot simply look to austerity as a strategy," Obama said after talks with Tsipras but, on the other hand, he also confirmed that, despite their differences, both the US and EU agree on the need to implement tough measures.

Obama congratulated the Greek coalition government not only for the harsh measures it implements, but also for its stance as a firm NATO ally. The US President thanked the Tsipras government because Greece is one of the five NATO member-states which allocate 2% of the annual bill for defense expenditures, despite "the economic difficulties". It is characteristic that Obama said that "in Greece we see one of the closer allies of the United States" - after all, it is true that the SYRIZA government has provided everything to serve the NATO plans in Eastern Mediterranean and the Middle East.

Regarding the Cyprus Issue, President Obama expressed his support for the talks which actually promote a dichotomous plan through the so-called bicommunal-bizonal federation.

From his side, Tsipras reaffirmed his government's will to promote the geopolitical importance of Greece and involve the country deeper in the imperialist plans. Within this context, the two men discussed the situation in Syria, Iraq and Libya and how Athens could help even more the warmongering plans in the broader region. 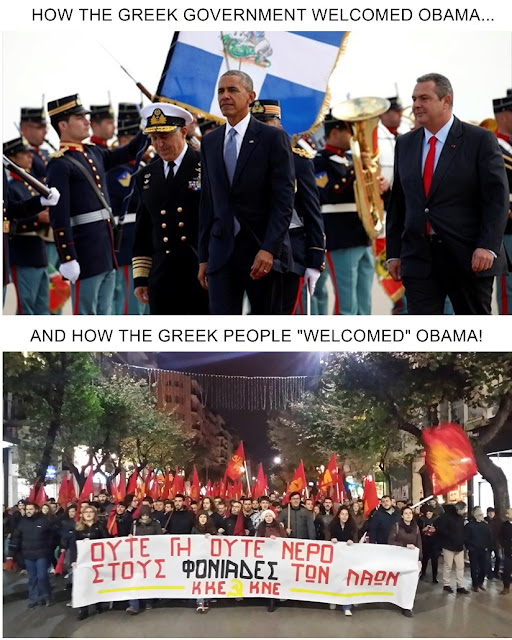 The visit of Obama in Greece was a chance for the Greek bourgeois class to upgrade its presense in the region. The government of Tsipras tries to use the visit of the outgoing US President in order to press Germany and the EU leadership for a debt relief, before Donald Trump takes office on January.

The Greek government as well as the President of the Republic, Pavlopoulos, once again showed their pathetic submissiveness to the leader of the most powerful imperialist state. They welcomed him as a "champion of peace and democracy", despite the record of Obama as the President who destructed Libya and Syria, who bombed Yemen and who helped the rise of the neo-Nazis in Ukraine.

However, the labour-peoples movement showed yesterday that Obama was not welcome in Greece. During massive demonstrations in the center of Athens, the people said a big "No" to imperialism and the warmongering plans of US-NATO-EU.