Donald Trump: A choice of the capitalist establishment

The result of the U.S Presidential elections highlights the deep intensification of the contradictions within the bourgeois system of the United States. The victory of Donald Trump has been presented by many as an "anti-establishment" message of the American voters. There is a whole mechanism of media, both in the United States as well as in Europe, which tries to present Trump as the "epitomy of the American dream", as the successfull non-professional politician who is willing to clash with the U.S political establishment.

Among those who celebrated the victory of Donald Trump are the political protagonists of fascism in Europe: From Marie Le Pen in France to the reactionary Prime Minister of Hungary Viktor Orban and from the far-right Austrian Freedom Party to the Nazi-fascist Golden Dawn in Greece.

The presentation of Donald Trump as an "anti-establishment" candidate was used as a tool in order to entrap a large number of voters. The part of the U.S. capital which supported Trump presented him as the "alternative" to the political establishment. The same had been done 8 years earlier, with the rise of Barack Obama in the U.S. Presidency. Back in 2008, Obama was the supposed "hope", he was the first African-American President who would end the wars abroad and who would bring social justice and peace in the United States. Of course, the expectations were not met at all.

The problems in the U.S. economy, the series of measures which the Obama administration took in order to respond to the financial crisis, as well as the intensification of the antagonism between the U.S capital with new, economically powerful rising countries, such as China, had a significantly negative impact on the working class and the low-income families of the country.

Without having developed class conciousness and without the existence of a strong working class party, a very large part of low-income Americans- especially in the countryside- fell "victims" of Trump's bombastic rhetoric. They saw Trump as the alternative solution to the crooked, corrupted political system that Hillary Clinton represented. Instead of blaming the real enemy and the source of their misery- the capitalist system- a large percentage of America's popular strata was charmed by Trump's pseudo-revolutionary, reactionary and xenophobic rhetoric of intolerance.

However, Donald Trump, like Hillary Clinton, is a representative of the rotten U.S capitalist system. Like Hillary, Trump is part of an establishment which expresses the power of the monopolies and large corporations. Trump and Hillary may have differences in their recipes regarding economy or foreign policy- however, their ultimate goal is the same: the preservation of the exploitative system which brings poverty, misery, unemployment to the American people and which produces wars and imperialist interventions abroad.

In his post-elections statements, Donald Trump said that its time for the United States "to come together as one united people". Actually, what the president-elect intends to do is to continue the barbaric, antipeople policy in favor of the monopoly groups and U.S. corporations, both internally and abroad. Nothing positive for the working class of the United States will take place during Trump's Presidency - as nothing positive would happen under Hillary Clinton.

The working people, the low-income, poor families in the United States must stop being under the false flag of either Democrats or Republicans. Their interests are not the interests of Donald Trump or Hillary Clinton. The only way out of misery, poverty and unemployment lies in the creation of a strong, class-based popular labour movement which will fight against the rotten capitalist establishment. 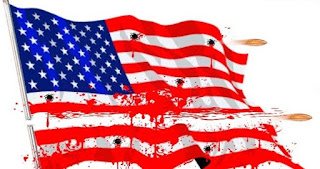 Check out these posts:

- The Disintegration of Bourgeois Democracy.