USA: No more workers’ blood for the profits of the bosses! 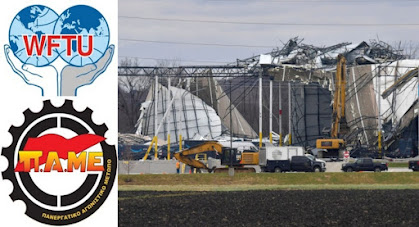 More than 90 people were killed in several states across the U.S. after tornadoes and heavy rains hit the region. Among them are six employees at AMAZON warehouse in St. Louis, Illinois, were roof collapsed and eight workers at a candle factory in Kentucky.

In a statement, the World Federation of Trade Unions (WFTU) and its militant trade unions across the world pledge "to continue the struggle for all necessary measures to protect workers from natural disasters and extreme weather events, measures that the US do not take because they consider them as a “cost”.

The WFTU also adds: "We immediately demand the implementation of all necessary health and safety measures in the workplaces, the workers not move to go to work and to take paid leave during extreme weather. In the 21st century where the advances of science and technology are enormous, extreme weather events can be both predicted and addressed with the appropriate infrastructure and with safe houses and workplaces. We express our solidarity with the victims and the families of the people who lost their lives."

In a statement, the All-Workers Militant Front (PAME) from Greece stresses out:

"PAME expresses its deep sorrow and condolences of the class unions of Greece for the loss of dozens of workers who were lost while working in the USA, in the sweatshops of AMAZON and other factories in the American South.

The exact number of victims has not yet been determined but dozens of families are mourning their own people. But at the same time the Biden government and the media are hurrying to blame for extreme weather conditions and not for the lack of necessary measures to protect the people and workers. While, AMAZON called the employees who lost 6 of their colleagues to go to work normally in the next shift.

This situation is a provocation over the blood of lost workers. At a time when billionaire capitalists are traveling to space, there are no basic measures to protect the workers and the poor from bad weather. At a time when the blood of the workers is still warm, the bosses demand for the production to continue so that they do not lose a single dollar.

It is a provocation in the 21st century for workers in Greece, the USA and anywhere in the world to be afraid of rain, wind or heat while there is all the necessary technology to protect the peoples. But instead of funding the necessary infrastructure against the weather, instead of checking workplaces and public buildings for their safety, funding of billions goes to big Business groups so as to increase their profits. While at the same time they impose the most anti-workers and inhumane working conditions.

In every country, in every workplace, the working class must step up the fight for measures to protect its life, its health and its safety.

No more workers’ blood for the profits of the bosses!"