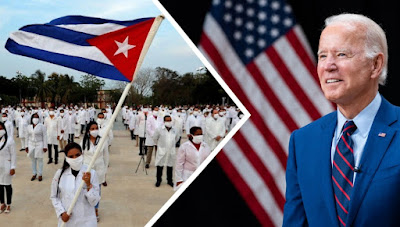 In this sense, the country was the victim of a political communication operation organized and financed from the United States in the summer, which failed due to the support of the people for the revolution, and which sought to show a non-existent social outbreak in Cuba. Today peace and tranquility reign and institutions are functioning normally within the framework of sanitary restrictions due to the pandemic.

However, the enemies of the revolution are once again trying to create problems by calling for a so-called peaceful march for next November 15th. The request for this march was denied on October 12, by government authorities from eight provinces, after considering the nature of the alleged demonstration illegal.

The Attorney General’s Office of the Republic of Cuba warned about the legal consequences of executing the march, making it clear that, if the decision of the local government authorities was not complied with, citizens would incur the crimes of disobedience, illegal demonstrations, instigation to commit a crime or other provided for and sanctioned in current criminal legislation. The procedure of the Prosecutor’s Office is based on Article 156 of the Constitution, which attributes to this body the mission, among others, of ensuring strict compliance with the Magna Carta, the laws and other legal provisions by citizens. In addition, Law 83 empowers the prosecutor to interview, warn, take statements and carry out any other type of diligence that may be necessary. It also foresees the purposes of preserving the rights and interests of state organs, institutions and agencies; in addition, to promote and contribute to the confrontation and prevention of crime, antisocial behaviors and the strengthening of the conscious observation of legal norms in citizens.

Overwhelming arguments made public account for the annexationist nature of the alleged march, promoted by people financed from abroad, who, masked in the falsity of a proclaimed pacifism, seek to generate chaos and induce the destabilization of the country, as part of a strategy of « “regime change” based on the formulas of the well-known soft coup, tried in other nations.

The “enthusiastic” accompaniment that the organizers have had is led by counterrevolutionary leaders of the so-called Council for the Democratic Transition of Cuba, a subversive platform, whose members have openly acknowledged receiving funding from the National Endowment for Democracy (NED), with a long history against Cuba.

In addition, the support that the mercenary skirmish has received from US legislators, political operators of the anti-Cuban mafia and the media, who encourage actions against the Revolution, has been public and notorious.

Note how, among the most furious supporters of the provocation are Congressmen Marco Rubio, Mario Díaz-Balart and María Elvira Salazar; the terrorist Gutiérrez Boronat, the infamous Cuban American National Foundation, and frustrated invaders of Brigade 2506, defeated in Girón.

Faced with such evil intentions of the provocateurs, the Constitution of the Republic is very clear about its precepts, which do not give anyone the right to act in favor of the interests of a foreign power or to put citizen stability at risk; Therefore, joining an annexation project is unconstitutional, illegitimate and immoral.

Juan González, main adviser for Latin America to North American President Joseph Biden, in an interview with the Efe agency after the Attorney General of the Republic of Cuba reported on the legal consequences of persisting in the march considered illegal by authorities of the Antillean nation, He expressed that the United States will respond, possibly with sanctions, if it considers – according to the canons of the government of that country – that there was a violation of the fundamental rights of the people of the Island or the promoters of the provocative march are prosecuted.

Carlos Fernández de Cossío, director general of the United States of the Ministry of Foreign Affairs (MINREX), specified that it is difficult for anyone to still have any doubt about who is behind the farce of the march, to which he added that it is extremely difficult that anyone could think that a government that respects itself would allow such a destabilizing provocation by a foreign power.

Related Articles of the Constitution

ARTICLE 4. The defense of the socialist homeland is the greatest honor and the supreme duty of every Cuban.

Betrayal of the homeland is the gravest crime, and whoever commits it is subject to the most severe sanctions.

The socialist system endorsed by this Constitution is irrevocable.

Citizens have the right to fight by all means, including armed struggle, when no other recourse is possible, against anyone who attempts to overthrow the political, social and economic order established by this Constitution.

ARTICLE 45.The exercise of the rights of individuals is limited only by the rights of others, collective security, general well-being, respect for public order, the Constitution and the laws.

ARTICLE 56.The rights of assembly, demonstration and association, for lawful and peaceful purposes, are recognized by the State provided that they are exercised with respect for public order and in compliance with the precepts established by law.