KKE blasts US and EU interventionist policy in Belarus 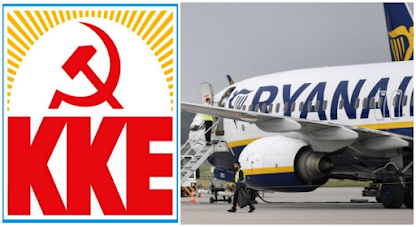 Concerning the forced landing of the Ryanair flight (operating the route from Athens to Vilnius) to Minsk and the interventionist plans by the EU and the U.S, in Belarus' internal affairs, the Press Bureau of the CC of the Communist Party of Greece (KKE) issued a statement (here in Greek).

"The U.S and EU plan to blatantly intervene in the internal affairs of Belarus cannot be hidden behind the unacceptable forced landing of the Ryanair aircraft in Minsk. It's way to much for these powers to pretend to be “sensitive” for this development, when they are the ones who have formed an entire institutional framework that, in the name of “fighting terrorism”, provides for such practices, which they have used repeatedly in the past, while now they hypocritically follow a “double standards” tactic for their interests.

For their plans they use the known pretext of “human rights” which has been also used in the past as a pretext for dozens of imperialist interventions and wars. In fact, as in the case of Ukraine, they do not hesitate to support even neo-Nazi organizations baptizing them as “activists”, while recently a coup plot was unveiled in Belarus, involving military forces and aiming even at the assassination of the elected President, reminding interventions in Latin American countries.

The government of New Democracy not only participates, but leads the way in this plan, adopting all the unacceptable pretexts, assisted by SYRIZA and KINAL. The people of Belarus themselves are the sole responsible to choose their future and determine the political developments in their country, without foreign interventions that serve other purposes."