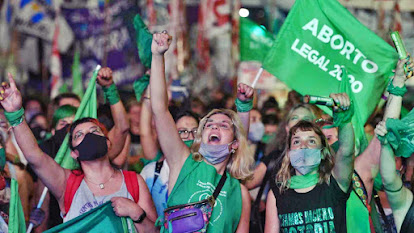 Argentina’s Senate voted on Wednesday to legalize abortion, a first for a big country in Latin America and a triumph for women’s rights campaigners achieved over the visceral objection of the reactionary Catholic Church.

“It was the first triumph of a battle that began decades ago in our country. Yesterday (Wednesday) the militancy, the collective strength won and today Argentina is more just since the State assumes the responsibility of guaranteeing us the right to health and a full life”, said Guadalupe Viñuela Flores, a member of the National Secretariat of the Federation of Communist Youth (FJC), the youth wing of the Communist Party of Argentina.
Flores added that “the fight continues to achieve a comprehensive public health system from which our girls will have access and information to know what their rights are", a report by Nuestra Propuesta reads.

Oriana Durán, member of the Buenos Aires Students' Committee of the FJC, pointed out that “historically, we communists have fought for the rights of working women and that is what we are achieving for pregnant bodies, fighting in the streets for a right that we need. Our axis was clear: it is not about yes or no to abortion, it is about getting out of hiding that condemns us to death before the neglect of the State”.

“That is why we always say that Abortion is a question of gender and class, since the rich can do it, but the poor die clandestinely. We have achieved a historic triumph and we will continue to fight for its implementation ”, she emphasized.

As Reuters and local media reported, the fiercely contentious vote was held on Wednesday 31 December, at 4:00 a.m, after a marathon debate that lasted through the night. In a vote of 38-29 with one abstention, the Senate backed the government proposal to allow terminations through the 14th week of pregnancy.

As the result was announced, a large crowd of thousands of people, women and men who had supported the bill, erupted in cheers outside the Senate building in Buenos Aires, waving the green flags that represented their campaign.