Workshop event organized by the KKE: "1940-1949: A decade of class struggle's sharpening in Greece" 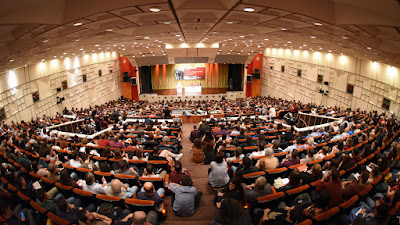 An interesting workshop event under the title "1940-1949: A decade of class struggle's sharpening in Greece" took place on Saturday 23 November at the headquarters of the Communist Party of Greece (KKE) in Athens.

The event, which was organized by the Attica Party Organisation, was attended by hundreds of members and friends of the KKE, workers, students, pensioners.


As 902 portal points out, the workshop is part of the activities organized by the Party on the occasion of the 75 years since the Liberation of Athens and the class conflict of December 1944.

The event was attended by the General Secretary of the CC of the KKE Dimitris Koutsoumbas.

The introductory speech was made by Evangelia Seferi, member of the committee of the Attica Organisation of the KKE, who pointed out that the aim of the event is to highlight the historical truth as well as to be a useful contribution for the extraction of useful conclusions for today's class struggle.

The major speech was delivered by Eleni Bellou, member of the Political Bureau of the CC of the KKE, under the title "The strategy of the KKE during the period 1940-1949". Several other KKE members, including scholars and historians, contributed with speeches to the workshop.